In tonight’s episode of Happu Ki Ultan Paltan, Amma and Rajesh get into an argument, over overpriced onions. 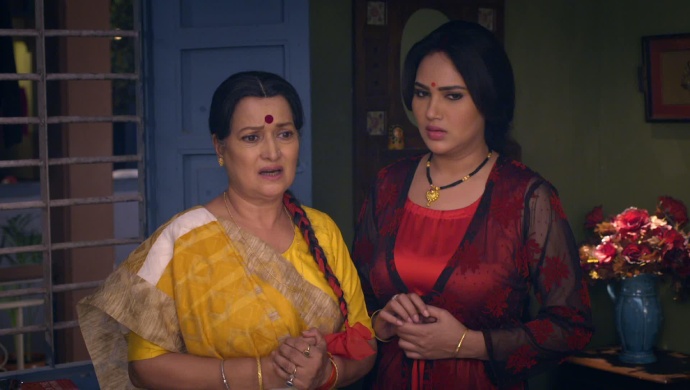 In this episode of Happu Ki Ultan Paltan, Amma is unhappy at the fact that Rajesh has used up all the overpriced onions that she had purchased for making pakoras. Rajesh says that she had made the dish, only to cheer the children up. Amma, however, is furious and asks Rajesh where she purchased these overpriced onions from and why did so in the first place. Happu tries to reconcile between the two and asks Rajesh to say sorry. The latter comes out with all guns blazing and says that even though Amma bought the onions at a relatively lesser price, they turned out spoilt.

Amma snaps back saying that if Rajesh continues to spend money like this, the whole budget of the house would turn upside down. Rajesh isn’t able to take the insults anymore and rushes back inside the kitchen. Rajesh is angry with her husband Happu, who seems to be taking his mother’s side during the argument. Rajesh’s anger knows no bounds as she threatens to fry him in oil, if he doesn’t go away.Meanwhile, Kat and Kamlesh are making plans to record a song. Kat aspires to become a singer one day. To this, Kamlesh replies that she just has to practice with him and she would become successful eventually.

Back at the house, Happu and Rajesh are quarreling with each other over the budget of the house. Rajesh wants Amma to quit her ill habits, instead of asking Rajesh to reduce the expenses. We then see Amma talking to Khodi Lal in her room. She says that she manages the house in a mere Rs. 25,000. She further confesses that she bargains tirelessly, just to get the prices right. Right then, Chamchi enters the room and says that Amma is the one who makes these ridiculous expenses, rather than her mother. Amma is unable to accept the blames put on her, by Rajesh. Meanwhile, we see Kat and Kamlesh practicing their song in Kat’s bedroom, while Malaika tries hard to sleep.

In the upcoming episode, we see Amma posing a challenge for Rajesh. What will it be?  Will she be able to stand the test? Find out in the next episode. Catch all the episodes of Happu Ki Ultan Paltan, streaming on ZEE5 here.

The Chargesheet: Who Killed Shiraz Malik? 7 Conspiracy Theories Around His Death