Happu wakes up at night and freaks out when he sees Rajesh talking about killing Amma and drinking her blood. 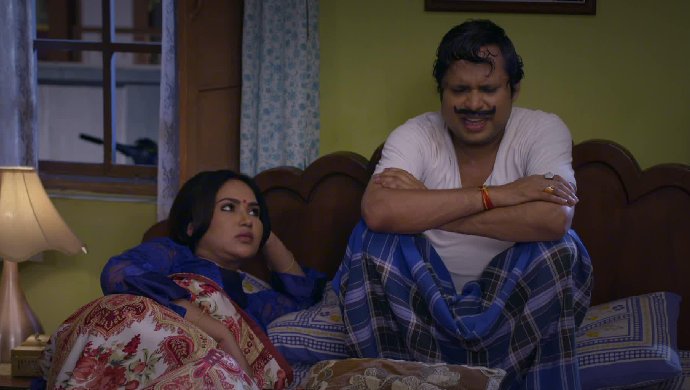 In the previous episode of Happu Ki Ultan Paltan, Rajesh calls doctor Chanchal Udas for a checkup at Beni’s house. She thinks that if she calls the doctor at home then everyone will get worried about her health. The doctor tells Rajesh that she has haemoglobin deficiency and recommends her to drink pomegranate juice. Later that day, Beni requests Rajesh to act in the play since their lead is unavailable.

In tonight’s episode, Beni calls Rajesh and reminds her to rehearse the dialogues nicely. She tells him to stop worrying about the play as she will give her best performance. Rajesh starts rehearsing the dialogues in a scary voice. Happu who is unaware of the play hears her voice and gets scared.

At night when Happu is asleep, Rajesh goes out in the veranda to rehearse for her play. Meanwhile, Kamlesh comes to Malaika and Kate’s bedroom with pomegranate juice. Sadly, both the girls refuse to drink it and ask him to leave. While coming down from the ladder, Rajesh catches him and notices a bottle of juice. Upon knowing that it is a pomegranate juice she tells Kamlesh to bring it daily for her.

Later, she starts rehearsing the dialogues. Just then Happu wakes up and freaks out when he sees Rajesh walking in their veranda and talking about killing Amma and drinking her blood. When she comes back to her bedroom, Happu tries to hide from her. Next morning, Happu asks Amma if she knows anything about Chudail (witch). Amma tells him that they are thirsty for blood and don’t even leave their own family members. This thing terrifies Happu and he gets worried about how to handles this situation.