In tonight’s episode of Happu Ki Ultan Paltan, Rajesh and Amma sort out their misunderstandings and embrace. Find out the details inside. 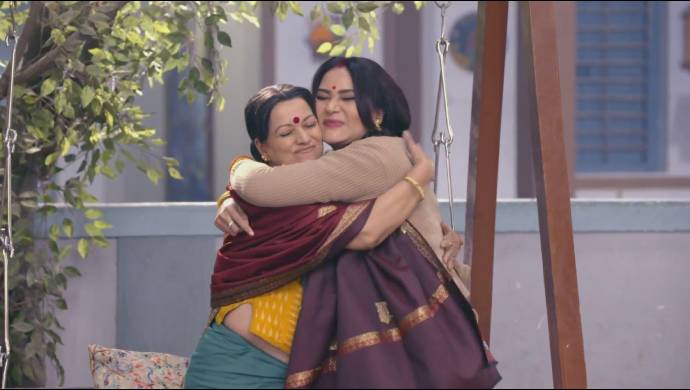 In this episode of Happu Ki Ultan Paltan, we see Amma replacing the expensive bottle of alcohol with a duplicate one. We then see Kamlesh and Kat, singing at the exact same spot, where they were performing yesterday. They get more excited, as people start rewarding them for their act. They are interrupted by Malaika, who asks them what they are trying to accomplish. Kat tells her that they are getting a good response from people, as they aking money for their stint.

Meanwhile, at Happu’s house, the Commissioner and he are joined by Benny at the dinner table. Rajesh asks them to start, while she goes into the kitchen to fetch chicken Manchurian. The Commissioner kisses the bottle of alcohol and asks Happu if it is an original one. Benny runs away from the scene, before things start to go downhill. Happu gets worried as the Commissioner starts throwing up again. The Commissioner gets angry and tries to hit Happu.

We then see Happu conversing with Rajesh, about where the plan went wrong. Rajesh asks him if he is upset. Happu says that he isn’t and they both come closer for a hug, before they get interrupted by their children. Later, we see Amma and Rajesh sorting out all their misunderstandings, and they both embrace. Rajesh then tells her that her saree has been burnt by the Dhobhi. Amma asks Rajesh to call him home. Amma then slaps a person who has come into their house, thinking him to be the Dhobhi. Happu tells him that the person who she has slapped is a big star.

In the upcoming episode, we see Rajesh getting excited because her brother is coming over to visit her, while Amma seems unhappy. What do you think will happen next? To find out, keep watching Happu Ki Ultan Paltan now streaming on Zee5.