In tonight's episode, we see Britney's father Mr. Chadda showering money on Happu and his family. Find out the details inside. 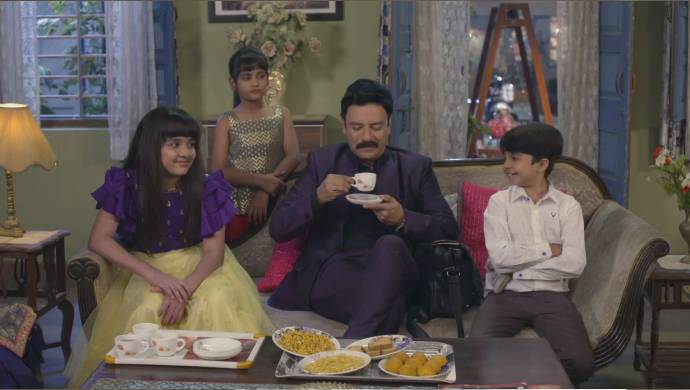 In tonight’s episode of Happu Ki Ultan Paltan, we see Happu standing outside his house waiting for someone. Just then, a person comes in with Benny’s suit and finds that Benny is not at home. He then asks Happu to hand over the suit to Benny. Happu is delighted because he can now dress well before the guests. After a while, Happu’s family is seen getting ready to meet Britney’s family. Chamchi then notices that the guests have arrived. Just then, two men enter Happu’s house carrying a basket full of gifts. Hritik runs outside to fetch Britney and her father. Britney’s father Mr. Chadda hands over a cheque of Rs. 5 lakh to Happu and asks him to use it to prepare for the wedding. He also gives Rs. 1 lakh to his future son-in-law Hritik. Mr. Chadda announces that they will be having a ring ceremony the next day. They are interrupted by Benny who comes in complaining about his stolen suit. Mr. Chadda gives him money to shut up and leave. Happu asks him why he acted this way but Mr. Chadda tells him not to worry as he’s very rich.

Later, Kat and Kamlesh wait for the telecast of the live reporting that they conducted at Happu’s house. Malaika creates a fight between Kat and Kamlesh. The reporting is finally telecast on TV and Kat gets excited to see herself on the small screen. After a while, Amma inquires if Happu has deposited the cheque in his account. Happu tells her that he has not as they still have time for the wedding. Amma and Rajesh then confess that they need to buy a new saree for the wedding. Happu reveals that he cannot afford expensive sarees for them. Just then, Hritik comes in and gives money to Amma for buying the saree.

Aakarsh and Janhvi Or Angoori and Manmohan : Who Is The Best Jodi On And TV?