Sutanand Baba dares to go near Rajesh and starts dusting her head. This makes Rajesh angry and she starts beating the Baba 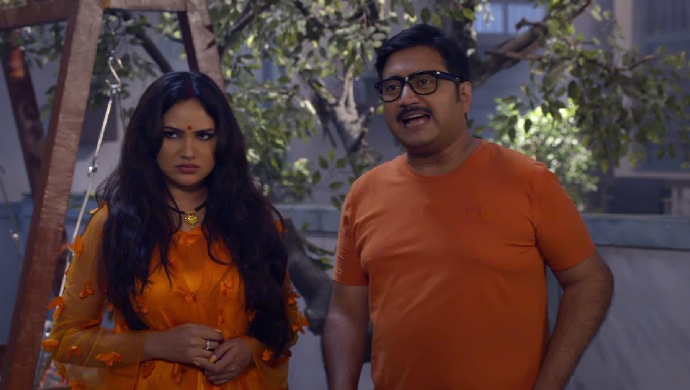 In the previous episode of Happu Ki Ultan Paltan, Happu gets scared when he sees Rajesh talking about having a dislike for the police uniform. The next morning, Happu tries to get ready quickly before Rajesh sees him but because he couldn’t find the uniform he runs to the office in his innerwear. Amma and Nargis meet Sutanand Baba and request him to come home and get Rajesh and Beni back to normal.

In tonight’s episode, Beni calls Rajesh at midnight and reminds her to rehearse for the play. She goes to the veranda and starts rehearsing. Meanwhile, Happu helps Sutanand Baba to enter the house. Before going to Rajesh, Baba tells Amma that a fat spirit is around her. Hearing this, Amma tells Happu that he is talking about Khodilal.

Later, Amma, Nargis, Happu and Sutanand Baba come to the veranda and see Rajesh walking upside down. They hear Rajesh saying that she is aware that they have called a Baba to control her but she will first kill the Baba. Hearing this, all of them get scared and search for baba. When Happu turns around he sees Sutanand Baba hiding under a chair. He then calls him and asks him to go and control witch.

The Baba dares to go near Rajesh and starts dusting her head with his broom and tells her that he has been sent to control her. This makes Rajesh angry and she starts beating the Baba. Just then Beni comes there and joins Rajesh in beating the Baba. Seeing Baba badly beaten up, Happu, Amma and Nargis run to save him.

Rajesh questions Happu how did the Baba manage to enter the house. He tells her that he called him to control the witch in her body. After knowing the confusion, Rajesh and Beni clear the misunderstanding by telling them about their play. The next day, Happu and all the family members promise to support Rajesh to perceive acting.

Laal Ishq: 9 Spooky Stories About Witches And Black Magic That Will Ruin Your Sleep