Happu gets annoyed with the argument between Amma and Rajesh. He tells them that he is going to stay at Beni's house. 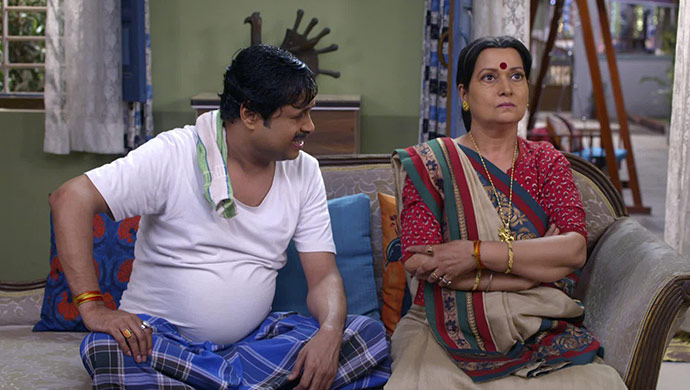 In the previous episode of Happu Ki Ultan Paltan, Happu helps Sutanand Baba to enter the house. They hear Rajesh saying that she is aware that they have called a Baba to control her but she will first kill the Baba. Hearing this, Happu calls Sutanand Baba and asks him to go and control witch. The Baba dares to go near Rajesh and starts dusting her head with his broom. This makes Rajesh angry and she starts beating the Baba.

In tonight’s episode, Amma gets angry on Rajesh for making hard parathas for her despite knowing that Amma has weak teeth. She thinks that Rajesh has done it purposely and it is her plan to kill her. Rajesh clarifies that she forgot about her teeth and will keep in mind.

Just then Happu comes there listening to the argument between Amma and Rajesh. He explains to Amma that Rajesh did it by mistake and now she does not need to create a scene out of it. But Amma and Rajesh continue their argument. A few moments later, Happu gets annoyed and says that he is not interested in staying the house anymore. He tells them that he going to Beni’s house and he will stay there and won’t come back home.

Later that night, Kamlesh comes to Kate and Malaika’s bedroom. He tells them that his friend Raj is depressed because his girlfriend left him and now he needs Kate’s help to help him get over his break up. Meanwhile, Rajesh goes to Beni’s house to apologise to Happu and ask him to come back home. Happu tells her that he needs peace and that is why he won’t come back home soon. He also says he will be staying there until both the ladies sort out their differences.

Take A Look At Ssudeep Sahir's Awesome Collection Of Perfumes!