In tonight’s episode, we see Cheetar demanding money from Happu in return for his promotion. Find out the details inside. 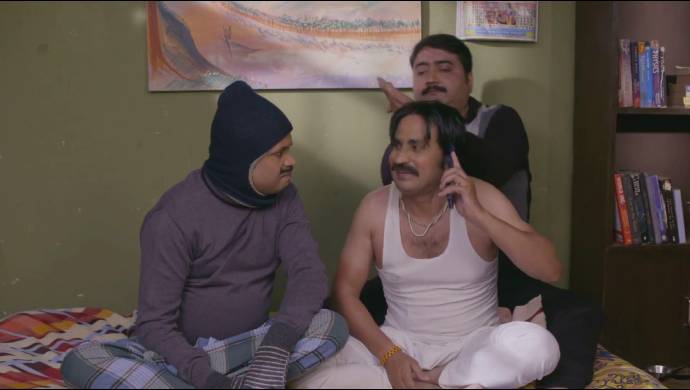 In this episode of Happu Ki Ultan Paltan, we see Cheetar messing with Ammaji and telling her that she should not believe in ghosts. He tells her that they should call a Tantrik to help her get rid of the ghosts. In Happu’s bedroom, we see him getting ready to go sleep. Rajesh walks in with a pack of cards. Happu says that he will go away and let Cheetar and Rajesh enjoy playing cards. Cheetar tells him that his presence intimidates him (Cheetar) and therefore Happu should go out so that he can talk openly with his sister. Happu goes away, irritated. After a while, Happu catches his children holding a gun. Malaika asks him how long is her uncle Cheetar going to stay at their house. Later, we see Cheetar asking someone on the phone to promote Happu to the post of Commissioner. He then tells Happu that his work is done and asks him to pay a sum of Rs. 20 lakh for it. Happu looks bewildered upon hearing this.

We then see a worried Happu entering his bedroom while Rajesh is busy making their bed. Rajesh asks him if he has seen her brother. Happu tells her that Benny is giving a massage to him. Rajesh tells him to ask Ammaji for the money required for Happu’s promotion. Meanwhile, Kamlesh has had a makeover and has turned into a mature old ma, as he feels that no one is taking him and Kat seriously during the protests. Kamlesh then asks her to get the placards for the protests and she obliges. A while later, Kamlesh is beaten black and blue by the constable and the Commissioner, as they think he’s a terrorist. Kamlesh pleads, saying that he’s innocent. The Commissioner says that every terrorist says that he’s innocent when he’s caught. Kamlesh calls out to Kat and she comes there running to save him.

In the upcoming episode, we see the Commissioner and the constables asking for a promotion from Happu. He then demands a sum of money from them in turn for their promotion. What madness is about to unfold next?  To find out, keep watching Happu Ki Ultan Paltan now streaming on Zee5.