In tonight's episode, we see Hrithik's obsession for drama reaching an alarming level. Find out how Happu tackles it, inside. 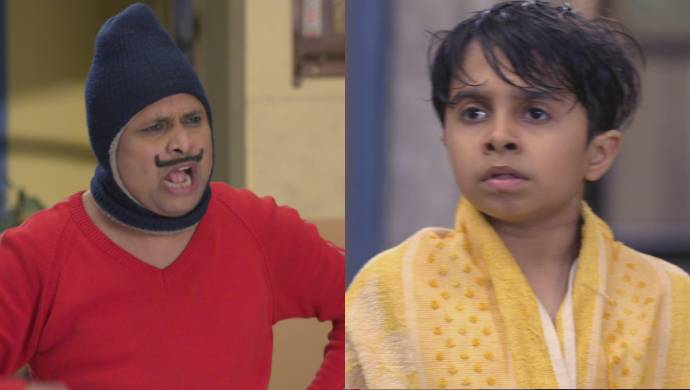 In tonight’s episode of Happu Ki Ultan Paltan, we see Amma and Rajesh waiting for all the children to come back home. When Amma sees Rajesh pacing in the courtyard, she informs her daughter-in-law that all the other kids have already arrived, except for Malaika and Hrithik. Soon, Malaika walks into the courtyard and her arrival adds to Rajesh’s nervousness. The tension is quite visible on her face as she enquires about her favourite son. Amma on her part doesn’t lose the opportunity to poke her daughter-in-law and taunt her about the amount of pampering she extends to her son. Finally, Hrithik arrives with this principal in tow, much to everyone’s astonishment.

When probed, the principal informs all the ladies that Hrithik has been bunking school, to go watch movies in the cinema hall. This gives Amma a golden opportunity to berate her daughter-in-law and to tell her how she is failing in the upbringing of her own kids. Partly angered and shocked, Rajesh asks Hrithik about this mischievous behaviour and his obsession with films. The boy tries to turn the tables on his principal and asks him about his presence in the cinema hall with the Maths teacher. The boy goes on to tell everyone that the principal thought he would be able to scare Hrithik into silence, but nothing really scares him. Now it is the principal’s turn to lose his composure.

Once Happu returns home, everyone in the family fills him in about Hrithik’s new obsession. After hearing everything, Happu reiterates that he never really liked the kid anyway. While the discussion is on, a loud cry rings through the house and shocks everyone. It is found out that Hrithik is sitting on a wick-chair and crying loudly, as if he has come to someone’s funeral. Everyone is concerned about him and wants to know what went wrong. In a comical turn of events, it is discovered that Hrithik is lamenting his grandfather’s death, who passed away more than a decade ago.  This angers Happu to no end, who announces that his son will be sent to a boarding school right away.

In the upcoming episode, we will see Hrithik trying to ensure his stay in Happu’s house, as he has a few tricks up his sleeve. What do you think they are? Share your thoughts in the comments section below.