The moment Rajesh turns to talk to Amma, the car hits a pedestrian. When Amma turns back to see who it was, she sees crowd running behind them. 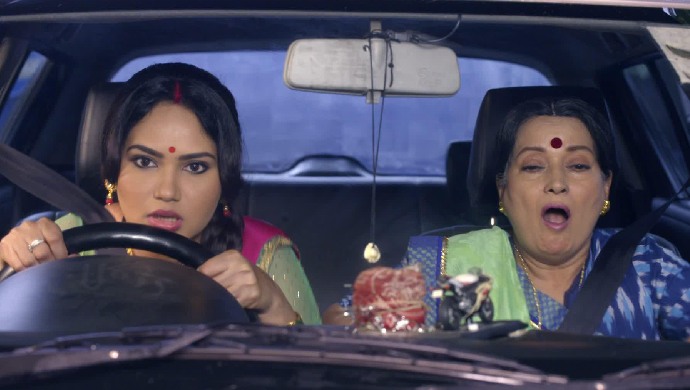 In the previous episode of Happu Ki Ultan Paltan, Happu tells Beni that he is missing the arguments and fights that used to happen between Amma and Rajesh. They make another plan to break Rajesh and Amma’s friendship. As a result, both the ladies have an argument and decide to leave the house. Happu then reveals that he did it intentionally. Everything gets sorted and Amma and Rajesh get back to their daily routine.

In tonight’s episode, Rajesh’s friend Karishma comes to meet Rajesh and tells her that she has to go out of town for some urgent work and there is a road construction work going on near her house. That is why she has parked her car near Daroga’s house. Rajesh gets excited and plans to go out for a long drive. Happu restricts her from driving the car and tells her that she needs to have a valid driving licence before doing so.

Later that day, Kamlesh asks Kate if she would like to go for a movie with him. Just then, Malaika comes there and insults Kamlesh by calling him a lazy person who doesn’t understand the value of money. Meanwhile, Rajesh comes to Amma to inform her that she is going to the market by car. Amma tells her that she will also accompany her. While driving, Amma says that Rajesh is not confident enough to drive the car. Hearing this, Rajesh increases speed.

The moment Rajesh turns to talk to Amma, the car hits a pedestrian. When Amma turns back to see who it was, she sees crowd running behind them. She immediately tells Rajesh to drive the car. At the police station, a fortune teller comes for his work. Beni who is sitting there, asks the fortune teller about his marriage with Bimlesh. He tells him that it is impossible for him to get married to the girl whom he loves. He then comes up with an idea that if Beni walks on burning coals then his chances of getting married will get better.