Amma and Rajesh tell Happu that they accidentally hit a pedestrian. Happu is sure that Rajesh is the one who hit the commissioner. 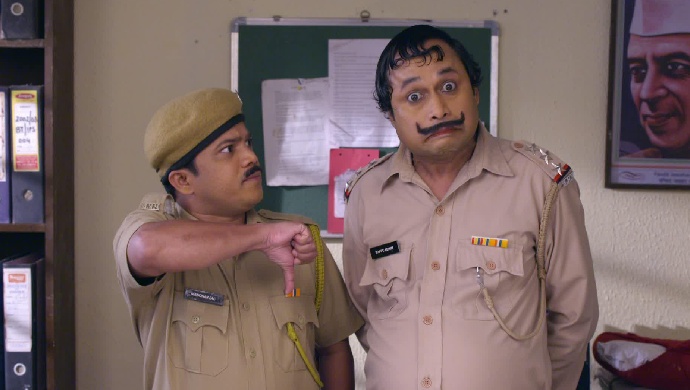 In the previous episode of Happu Ki Ultan Paltan, Rajesh gets excited and plans to go out for a long drive. Happu restricts her from driving the car and tells her that she needs to have a valid driving licence before doing so. Later that day, Rajesh comes to Amma to inform her that she is going to market by car. Amma tells her that she will accompany her. While driving, Amma says that Rajesh is not confident enough to drive the car. Hearing this, Rajesh increases speed and the car hits a pedestrian.

In tonight’s episode, Amma is worried about the guy who was hit with by the car. Rajesh assures her that Happu will handle it since he is a daroga. At the police station, the commissioner comes to visit Happu Singh with his injured leg. He tells Happu that in the morning when he was crossing the road, a speeding car hit him and drove away.

The commissioner asks Happu to find out the driver and catch him as soon as possible or else he will be made the havaldar and Manohar will be made the new daroga. Happu notes down the details of the car and the location where the accident happened. At night when Happu returns home, he sees Kamlesh digging the road in front of his house. Happu tries to jump to reach his house but gets injured while doing so.

After the dinner, Amma and Rajesh tell Happu that while they were going to the market by car, they accidentally hit a pedestrian. Happu gets shocked and asks them about the car details and the location. Hearing the same, he is sure that Rajesh is the one who hit the commissioner. Happu then goes to Beni to ask for a solution and offers him money. Seeing the money, Beni quickly agrees to listen. After knowing that Rajesh hit the commissioner by car, he gives back the money and also gives some extra cash to Happu saying only God can save him.