Knowing that Rajesh's Mama is the same guy who ran away with Chatto mausi, Happu lies to Amma saying he has not found him yet. 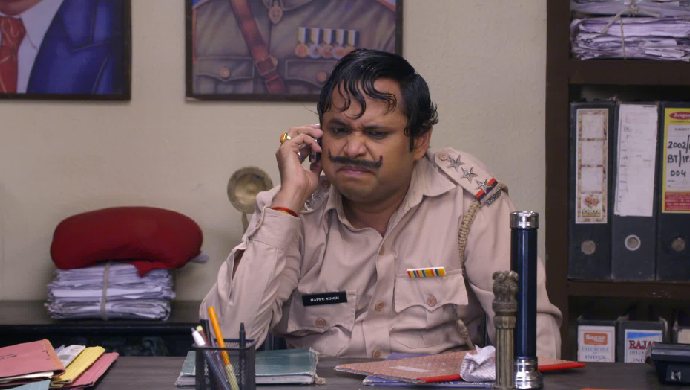 In the previous episode of Happu Ki Ultan Paltan, Amma tells Rajesh about her sister Chatto who ran away a day before her marriage. She tells her the name of the guy who manipulated her was Prakash Jhajuriya. Listening to her, Rajesh is afraid as it is also the name of her Mama. Later when she calls her Mama, she finds out that her Mama is the guy who ran away with Chatto mausi.

In tonight’s episode, Amma calls Happu and asks him to find out the guy who ran away with her sister, Chatto. Happu assures her that he will find him soon. After coming from the movie Kate plans to run away with Kamlesh and asks him to make arrangements for them as she wants to experience the thrill of running away.

At night, Happu is having drinks with Beni. He tells him about his Chatto mausi and the guy who ran away with her. He says that as soon as he finds him he will bash him for manipulating his Chatto mausi. A few moments later, a policeman comes there and informs Happu that he has found out the guy and his relatives. He says that Prakash Jhajhuriya has a sister named Avadhesh and she has two daughters, Rajesh and Bimlesh. Listening to him, Happu gets shocked as it turns out that Rajesh’s Mama is the same guy who ran away with Amma’s sister.

Their conversation is heard by Hrithik and he immediately tells this to Rajesh. When Happu comes to his bedroom and sees that Rajesh is angry at him for talking bad about her Mama. He tries to convince her saying he was not aware that it is her Mama or else he would have never said so. Later Rajesh tells him to stop speaking bad things about her Mama as he did not force his mausi as it was her own decision and she was mature to take the decision.

The other day, Amma asks Happu, if he has got any news about the Prakash Jhajuriya. He lies to her that the search is on and as soon as he finds anything, he will inform her. She also offers a bribe to Happu knowing that he doesn’t work without bribes but he refuses to take it.

Meri Hanikarak Biwi: After Her Successful Operation, The Real Mishri Gets Kidnapped