In tonight's episode of Happu Ki Ultan Paltan, Rajesh starts flirting with Pappu and compliments him for his looks. 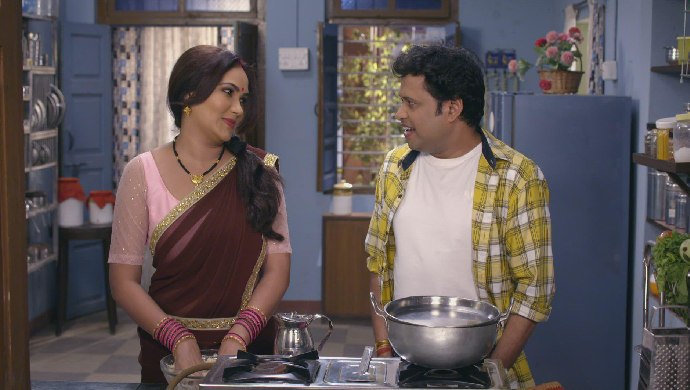 In the previous episode of Happu Ki Ultan Paltan, Pappu introduces himself to everyone as Happu’s twin brother. Happu comes at Benny’s house to wear his uniform and return home as Happu. Rajesh asks him about Pappu and doubts that he is his twin brother because both of them look different. Next day, the kids compare Happu with Pappu and say that Happu is no match for his looks. Happu gets annoyed after listening so much about Pappu and leaves for the police station.

In tonight’s episode, Amma and Benny come to the police station to meet Happu. He tells them that he did not expect Rajesh to get attracted to Pappu so easily. Benny gets shocked and assumes that Rajesh’s sister Bimlesh might also get attracted to other men just like her sister.

Later, Happu changes his looks and comes home as Pappu and goes to the kitchen to meet Rajesh. She starts flirting with him and compliments him for his looks. A few moments later, Rajesh screams and hugs Pappu saying she saw a lizard. Just then, Amma comes there and sees Rajesh in Pappu’s arms. She scolds Pappu for getting close to Rajesh as she forgot that Pappu and Happu are one.

Diana Penty In Parmanu: The Story Of Pokhran Proves We Need More Women In Power

Kamlesh dons a macho look by using a fake beard and moustache. Sadly, Kate rejects his looks and breaks his heart. In the evening, Happu is sad because Rajesh likes Pappu. Later at night, Happu is waiting for Rajesh in his bedroom. When they get close, Rajesh says Pappu’s name instead of Happu and hearing this the latter gets shocked.

In the preview of the next episode, Rajesh tells Pappu that she wants to break her marriage with Happu and run away with him.