While Happu and Rajesh are talking about her Mama Prakash Jhajhuriya, Chamchi hears them and tells everything to Amma. 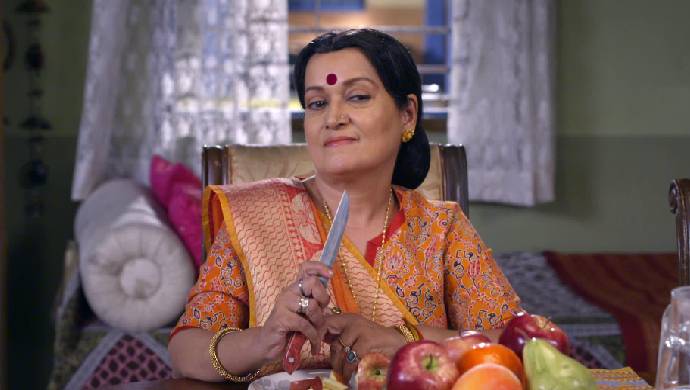 In tonight’s episode, Amma calls the commissioner of police to find out the guy who ran away with her sister, Chatto. Seeing the commissioner at home, Happu gets surprised and tells Amma that she shouldn’t have involved him in the case as it is a family matter. The commissioner interrupts in between saying he can understand her emotions because he felt the same when his wife ran away with his driver and never came back.

Later that day, Rajesh gets angry on Happu for supporting Amma and cursing her Prakash mama. A few moments later, she gets a phone call from the same Mama and he informs her that he is coming to meet her. Listening to this Happu gets shocked and tries to snatch the mobile from Rajesh but she doesn’t allow him. Rather she asks her Mama to come home whenever he wants. While Happu and Rajesh were talking Chamchi heard the conversation and immediately told it to Amma. Amma then makes a plan to get hold of the Mama. She tells Khodilal that soon she is going to send a new partner for him.

Knowing Amma’s anger, Happu is afraid that she might kill him. He goes to Beni to get an idea to avoid the situation. He tells him that if he wishes to avoid Amma meeting Mama then he needs to kidnap Rajesh’s mama before he reaches home. Happu at first refuses the idea but seeing that he has no other option agrees to it. Both of them are then seen disguised as a coolie at the railway station waiting for Mama.

Will Happu manage to save Mama from Amma’s wrath? Let us know your thoughts in the comments below.