In tonight's episode, Dimple gets scared when Beni tells him that he will arrest her for blackmailing Happu and his family. 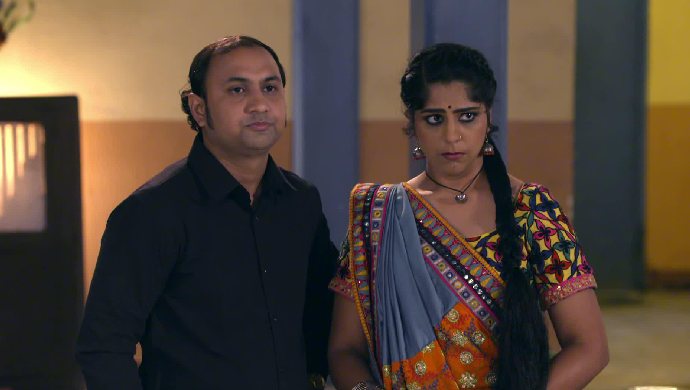 In the previous episode of Happu Ki Ultan Paltan, Dimple asks Happu, Amma and Rajesh to come into the bedroom and threatens Happu to stop scolding her or else she will file a case of harassment against him. She asks Happu to wash clothes, Rajesh to cook food and Amma to clean the house. Kamlesh sees Happu washing clothes and starts teasing him.

In tonight’s episode, Happu goes to Beni’s house to share his problem while having drinks. He asks Kamlesh to make fritters for them but the latter refuses to do it saying he doesn’t know how to make it. Beni tells him to stop giving excuses and make it.

Happu tells Beni how Dimple is threatening them to file a complaint against them. Beni feels sorry for his situation and assures that he will do something for it. A few moments later, Kamlesh comes there with the half fried fritters. Seeing this, Happu and Beni start scolding Kamlesh for being lazy and irresponsible. Kamlesh gets annoyed and says that he is leaving the house.

He goes to Malaika and Kate’s bedroom to talk to Malaika. She gives him the advice to go home and apologises to his father. Meanwhile, Happu and Beni get drunk and decide to teach a lesson to Dimple. They tell Dimple that Beni is a famous lawyer and now he will call the police and make her arrest for blackmailing Happu and his family. Hearing this, Dimple gets frightened.

Just then, Happu and Beni’s friend Jeetu comes there and hugs Dimple. He reveals that she is his wife and it was his plan to teach a lesson to Happu Singh because he had insulted him a few days back. Dimple apologises to Amma and Rajesh, and Happu and Jeetu sort out their differences.

In the preview of the next episode, the commissioner scold Happu Singh for doing a scam. He calls Happu Singh in regular clothes so that he can slap him. Hrithik who came to meet his father sees Happu getting punished.