After receiving Mama from the railway station, Beni and Happu bring him at Beni's house and try to explain the situation. 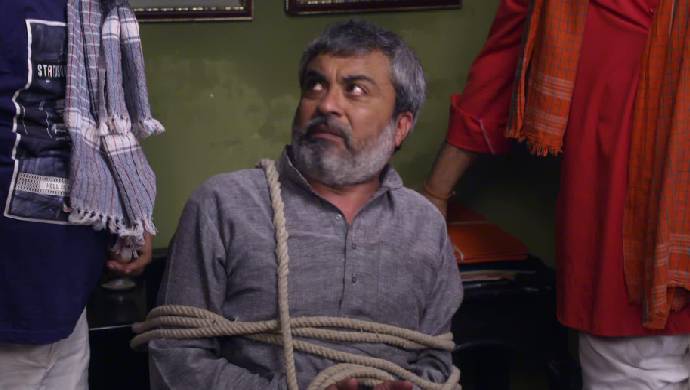 In the previous episode of Happu Ki Ultan Paltan, seeing that Happu is unable to find Prakash Jhajhuriya, Amma asks the commissioner of police to do the needful. Rajesh gets a phone call from her Mama saying he is coming to meet her. Chamchi hears their conversation and tells everything to Amma. After knowing that Rajesh’s Mama is the same guy who ran away with her sister, she gets furious and waits for her Mama to come home so that she can bash him.

In tonight’s episode, Beni suggests Happu that he should kidnap Mama before he reaches home. As per their plan, they disguise as a coolie and a rickshaw driver to receive Mama from the railway station. They make sure that nobody notices them and bring Mama to Beni’s house and tie him up on a chair.

At home, Amma sees Rajesh is waiting for her Mama in the veranda. Having no idea about Amma knowing the secret, Rajesh lies to her saying she is sitting there to take a breath of fresh air. At night, Kamlesh gets caught by Malaika when he tries to run away with Kate. Mama is not able to understand why he has been kidnapped. Happu asks Beni to make him a drink so that he will understand better.

After the drinks, Happu explains to Mama that he should avoid going to his niece Rajesh’s house as her mother-in-law Katori is the sister of his wife whom he ran away with. But Mama is too drunk to understand anything as he blabbers foolish things. At home, Khodilal tells Amma to forgive Rajesh’s Mama for his mistake. The latter tells him that it was an unpardonable mistake and she won’t forgive him. She further tells him that she is planning to kidnap him before he comes home so that she can take her revenge. Hrithik who was passing by Amma’s bedroom hears this conversation and tells it to Rajesh.