Amma tries to convince the commissioner to forgive the driver who was responsible for the accident. 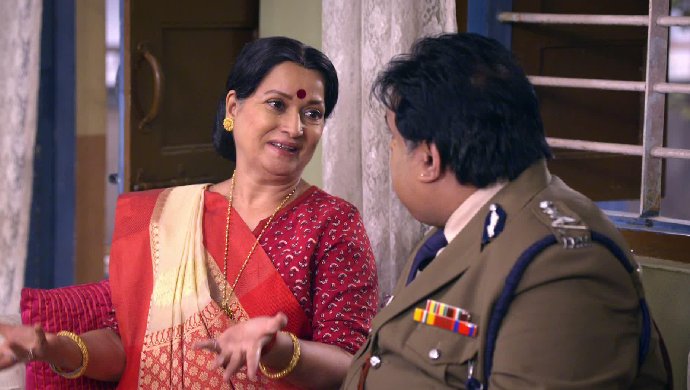 In the previous episode of Happu Ki Ultan Paltan, the commissioner comes to the police station with his injured leg. Upon asking the reason, he says that a reckless driver hit him and drove off. He asks Happu to find out the driver or else he will make him a havaldar and Manohar will become the new daroga. At night, Amma and Rajesh tell Happu that they accidentally hit a pedestrian on the road. Hearing the details of the car, Happu is sure that Rajesh is the one who hit the commissioner.

In tonight’s episode, Rajesh requests Happu Singh to handle the commissioner and save them from getting arrested. She then sings a song for him and both Happu and Rajesh start dancing. Hearing the sound, Amma gets angry but later starts dancing with Khodilal.

The next day, Manohar is seen giving measurements to a tailor to get himself a new uniform in the hope of becoming the inspector. Upon asking the reason, he lies to Happu that he is doing it for his brother-in-law’s marriage. A few moments later, the commissioner comes to the police station and asks Happu if he caught the driver or not. Happu assures him that he is working day and night to search for the driver and will soon find him.

Later that day, the commissioner comes at Happu’s house as he wants to meet Amma. Amma asks the commissioner about his health and tries to convince him to forgive the driver who did the accident. But the commissioner is firm on his decision and tells her that he will soon find him or her and punish.

As suggested by the fortune teller, Beni tries to walk on the coal to get married to Bimlesh. Just then Chamchi and Hrithik come there and blackmail him to get them something to eat or else they will tell this thing to Bimlesh mausi.