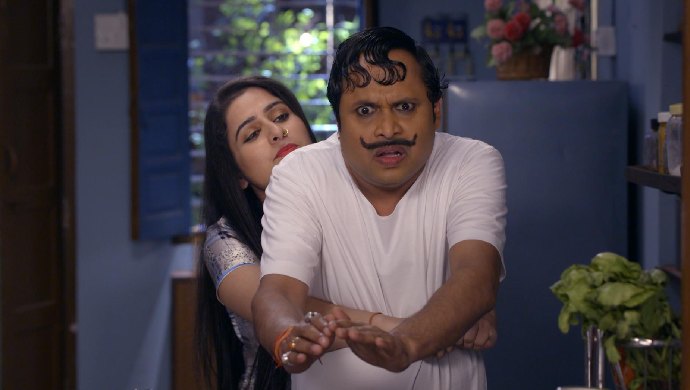 In the previous episode of Happu Ki Ultan Paltan, Amma gets a call from Atbir Mama and he tells him that he is coming to Kanpur for a few days. On one hand, Amma gets excited but on the other hand, Rajesh gets upset and calls Happu in the kitchen. Happu tries to convince Amma to ask Atbir Mama to postpone his plan but the latter refuses to do so. Rajesh bribes Pandit Ji and tells him to lie to Amma that if her relatives come to meet her health will be at risk. Meanwhile, Kamlesh and Kate convince Beni to allow them to open a cafe in his veranda.

In tonight’s episode, Amma gets scared after being told by the pandit that her life is at risk if her relatives come to visit her. Rajesh asks her to call Atbir Mama and tell him to postpone his plan.

The Pandit Ji tells Amma that if she wants to avoid problems then she must invite one of Rajesh’s relatives. Rajesh tells Amma that her cousin Laila is in Kanpur. The latter asks Rajesh to call her cousin right away. Later that day, Laila comes home with Hapu as he went to the railway station. At night, Laila comes to Happu and Rajesh’s bedroom and tells him that she needs tea.

What Inspired Filmmaker Abhishek Kapoor To Make A Movie On Kedarnath?

When Happu comes to the kitchen to make tea, Laila starts flirting with him and tries to get close to him. Amma sees Laila hugging Happu and gets shocked. On the other hand, Beni, Kate and Kamlesh inaugurate their cafe.

In the preview of the next episode, Laila asks Happu to propose him and the latter does it to prove that he is romantic.