Malika finds chicken bones near Beni's house and tells this to Amma. 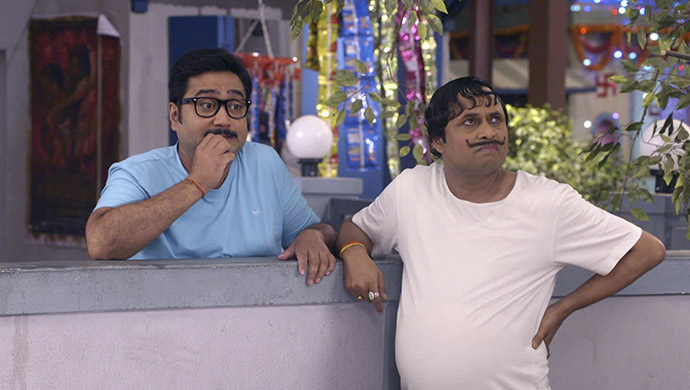 In the previous episode of Happu Ki Ultan Paltan, Happu gets shocked when Amma tells him that Babloo the rooster is already delivered to their home. He comes back to his bedroom and tells Rajesh that they have unknowingly killed Babloo. Later that day, Amma tells Happu to file a missing complaint about Atbir Mama’s rooster and search for him in the city.

In tonight’s episode, Malika sees chicken bones thrown near Beni’s house and suspects that he is involved in the Babloo case. She questions Beni about it and he gets conscious and starts fumbling. Seeing him fumbling, Malika is sure that he has done something wrong and decides to find it out.

At home, Rajesh asks Amma if she has any updates about the Babloo. She replies saying Atbir Mama had called the delivery guy and he is going to come home himself and identify who was the one who took Babloo. Hearing this, Rajesh gets worried and calls Happu and tells him to come up with an idea to save everyone from Amma’s wrath. Happu is unable to think of anything at the moment.

Later that day, Kate is getting hiccups and thinks that Babloo is missing her. She meets Kamlesh and while they are talking to each other, Malika passes from there and overhears their conversation. Malika interrupts in their conversation and asks Kamlesh to the bedroom at night as she wants to ask some interrogate him. Amma is worried about Babloo and thinking with Chamchi how will they find Babloo. Malika comes there and tells her about the bones that she got near Beni’s house. Amma feels that he has Babloo and goes to call Happu and take actions against him.

At the police station, the commissioner comes asks Happu that why is he tensed? He tells the commissioner about Babloo to which he laughs and says that even he was at there place then he would have done the same. At the end of the episode, the delivery guy comes home and seeing him, Rajesh gets worried.