Happu Ki Ultan Paltan has been well-received by the audience, and it called for a mini-celebration. 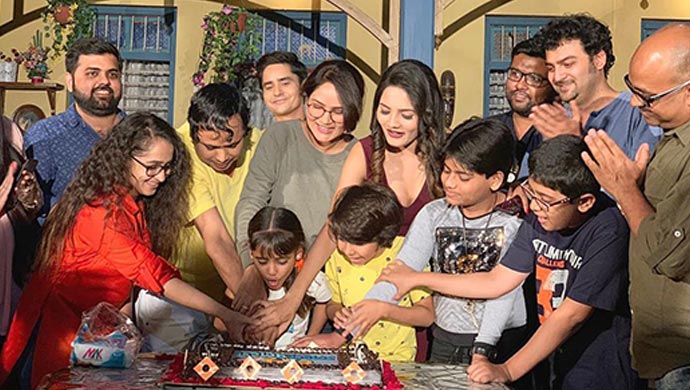 It was a challenge for actor Yogesh Tripathi whom we have known for years as Daroga Happu Singh from Bhabi Ji Ghar Par Hain. The makers of the show decided to start a new show with the same character without making changes in the current one. Everyone was interested to know more about Happu Singh’s household life. The show was first aired on 6th of March 2019, and perfectly slotted before the popular show Bhabi Ji Ghar Par Hain on And TV.

We must admit that Happu Ki Ultan Paltan is the perfect family entertainer as it has a different shade of humour that doesn’t carry the adult tone. Be it the character of Amma, Rajesh, or any of the 9 kids, every character has its own flavour, which adds up to the show. Though the show is new, it is receiving praise from the audience and all the characters are enjoying a great fan following. The viewership of the show proved its success and it called for celebration for the cast and crew of Happu Ki Ultan Paltan.

The cast of the show celebrated the success by cutting the cake. Take a look at the post uploaded on social media:

Yogesh and the makers of the show were happy to see how the audience has shown their love towards the new show.

Here’s the whole team celebrating success by cutting a cake.

Yogesh did a commendable job with his acting and was also appreciated by everyone for the same.

What was your first reaction after watching the show? Let us know in the comments section below.

Section 377 Verdict: All You Need To Know About SC's Ruling To Decriminalise Homosexuality

Mukku From Kedarnath Or Shagun From Simmba: Which Role Of Sara Ali Khan Is Your Favourite?