The cast of Shukranu: Hui Emotion Ki Nasbandi played 'Two Truths And A Lie’ game with ZEE5 which revolved around the male reproductive system. 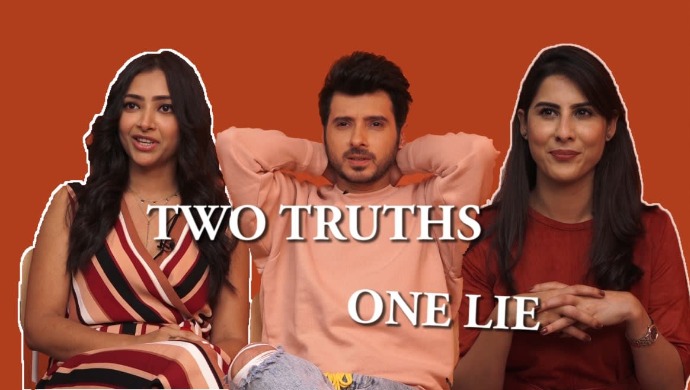 We are quite sure that you’ve received ZEE5’s Valentine’s Day gift for ya’ll, a satirical comedy to relish! Shukranu, starring Shweta Prasad Basu, Divyenndu, Sheetal Thakur, has been dropped on our platform so in case you are still not sure what to watch, we suggest you don’t spend those precious minutes thinking and simply stream the film. Released on February 14, Shukranu has become the talk of the town thanks to its an interesting plot and engaging performance. Bring together a team with Shweta, Divyenndu and Sheetal and you’ve got yourself a cast strong enough to combat boredom!

They may have entertained you and left you in splits with Shukranu but the stream of entertainment doesn’t end there. We met with the team of Shukranu and made them play a game of ‘Two Truths And A Lie’. Basically, all the questions were relevant to the plot of their film as they revolved around the male reproductive system.

You can check out the video below –

While Divyenndu and Sheetal Thakur did manage to get at least one answer right, the same wasn’t the case with Shweta. Boy, does she need to pay her 8th-grade books a visit! She made quite a few errors in judgement about the male reproductive system. Sheetal too started with a wrong answer but somehow managed to turn things around for herself by getting the next answer right! Meanwhile, Divyendu got most of them right.

Shukranu: Hui Emotion Ki Nasbandi is a ZEE5 Original film starring Divyenndu Sharma, Shweta Basu Prasad and Sheetal Thakur in pivotal roles. The theme of the film is around the concept of forced sterilisation that was imposed on men in the 1970s. Divyendu plays Inder, a simple man, who is forced to undergo sterilisation which affects his marriage, love life and more. How does he tackle the issue at hand is what forms the crux of the plot. You can watch it, right here on ZEE5.

The Rise And Rise Of Shahid Kapoor; We Trace The Career Graph Of The Birthday Boy