Commando 3 continued it's winning streak at the High Five On ZEE5 Awards. State Of Siege: 26/11 and Zee Cine Awards also made a quick impact. 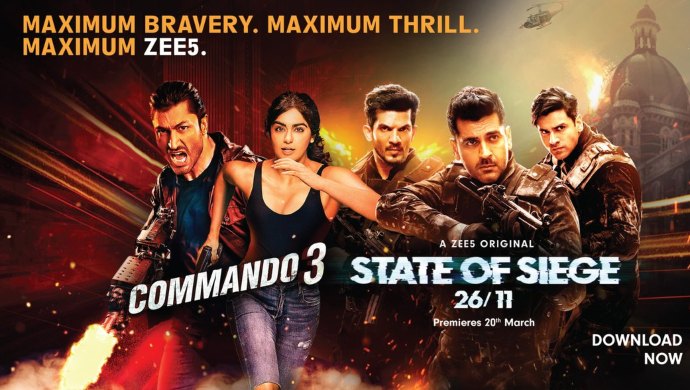 The recently concluded #HighFiveOnZEE5 Awards was a unique one because it was the first time the entire awards ceremony was conducted over a video call. At the awards, the most watched content on ZEE5 in the month of March and in the past six months were awarded as two separate categories. Commando 3 and State Of Siege: 26/11 were the most watched film and series on ZEE5 in the past month which shows that people found the fight against terrorism more interesting than the current fight against Coronavirus.

Catch a glimpse of both #HighFiveOnZEE5 award winners Commando 3 and State of Siege: 26/11 here.

Here’s a look at the nominees and winners for most viewed content on ZEE5 in the month of March 2020, where Commando 3 has won for the second month in a row.

Nominees for “Most Watched Movie’:

The winner is – Commando 3

Nominees for ‘Most Viewed Original Show’:

Nominees For ‘Most Watched Music Video’:

Sukoon – It Happened In Calcutta

The winner is – Zummba (Good News)

While these were the nominees for the month of March 2020, #High Five On ZEE5 also celebrates the most watched shows and films in the past six months. This list has seen two Marathi shows climb up in popularity.

The winner is – The Tashkent Files

Nominees for ‘Most Watched Original Series’:

Did your favourite film or series make it to the winners list? Tell us in the comments below.

Get all the live updates of the Coronavirus outbreak in the ZEE5 News section.