Rajat Kapoor and Ritabhari Chakroborty show the romantic side of teacher-student relationships in this heart-warming ZEE5 short film. 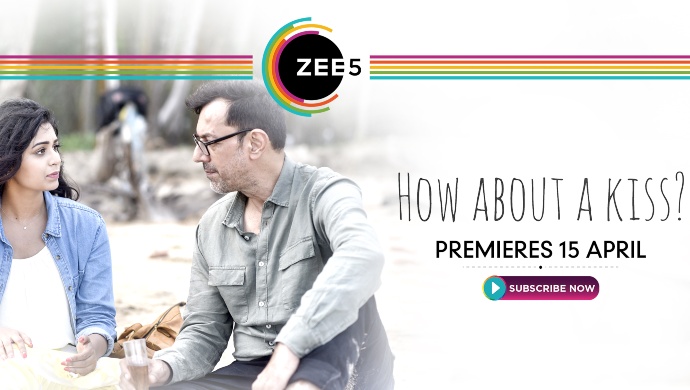 How About A Kiss is a question that this short film is based on, in a nutshell. Rajat Kapoor plays the role of a teacher and Ritabhari plays the role of a student who is slowly infatuated with her professor. Rajat Kapoor was previously seen in the ZEE5 original series Code M, while Ritabhari has acted in the popular Bengali film Shesh Theke Shuru on ZEE5. The film has been directed by Ritabhari’s mother Satrupa Sanyal who has directed Bengali films like Tobuo Basanta previously.

Watch the trailer for How About A Kiss here.

Rajat Kapoor plays the role of Professor Anand who notices that one of bright students Pari (Ritabbhari Chakravorty) is in the wrong kind of mental zone. He tries to help her get out of her depression by asking her to open up about her problems and suggesting ways to help her get better. However, during this off-classroom collaboration, they both ended developing feelings for each other. This raises a dilemma for Anand who has to choose between being ethical and following his heart.

Rajat Kapoor first seamlessly in the role of the professor who cares about his students and doesn’t mind being friends with them. Ritabhari as Pari has to show a wide range of emotions through this 24 minutes short film. She goes from being depressed and crying bitterly in her pillow to jumping on the beach and happily running towards waves and manages to make both look equally real.

The main conflict of this film is the temptation for Professor Anand to give in to his heart’s desires and show his love to Pari. The chemistry between Rajat and Ritabhari will remind you of your own crush on your teacher especially if that teacher as also helped you shape your life at that age. Ritabhari has also written the script for this film and it shows how familiar she is with her character.

A special mention goes to the music in this film. The light jazzy sounds accompany the visuals perfectly. This film offers good mental health tips for people who might need like: Let writing your feelings down if you cannot speak it or trying to meditate and focus on happy memories. This film will take you a nostalgic trip down the corridors and class rooms of your own college or school in 24 minutes.