It Happened In Calcutta Song Review: A Spellbinding Rendition Of Tagore’s Ekla Chalo Re 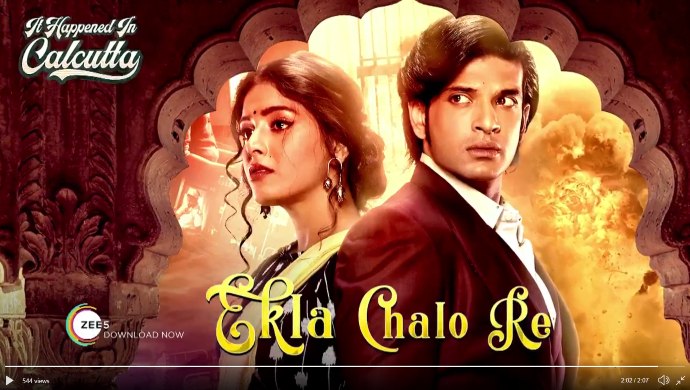 ​​Telling the most intriguing tale of love, war and everything in between, the ZEE5 Original series It Happened In Calcutta stars Naghma Rizwan, Karan Kundrra and Harman Singh in the lead roles. Revolving around Kusum Ganguly’s (Naghma) life, the story is set in the 1960s and 70s. The yesteryear’s love saga takes you into the City of Joy-Calcutta, as the name suggests. Ronobir Chatterjee is essayed by Karan and Harman plays Ratan Bagchi. Although its a love-triangle between the three, the series also focuses on the cholera epidemic in 1960 and the Indo-Pak war in 1970. Recreating the famous song by Rabindranath Tagore, the series has its own mesmerizing rendition of Ekla Chalo Re:

​The music video opens with Kusum, extremely bruised and battered lying in jail. Her voice-over narrates, “They say when your life is near its end, every living moment of it flashes in front of your eyes. But I was just thinking of the one moment that changed everything!” Shots of Ronobir romancing Kusum and her reminiscing those days, are woven through the soulful voice of Pooja Shankar. Amidst the scenery of Kolkata’s Howrah Bridge and colonial architecture, Ratan Bagchi and Kusum Ganguly are seen passing through a Durga Puja celebration, but in sorrow. Ronobir gets in his car and leaves a heartbroken Kusum behind. And the piercing lyrics of the song blends perfectly with the emotion.

Kusum narrates again, “One moment, which has life on one side and death on the other, love on one side and war on the other!” Then, with the build-up of flute tunes and drum beats, begins the epic chorus of Ekla Chalo Re, not failing to give you goosebumps! Ronobir is running out of Calcutta Medical College to stop Kusum, who is departing in a jeep, wearing the army uniform. In between a gun-firing and war-cry, it seems like Ratan Bagchi proposes to Kusum, but she looks away. She is made to wear iron shackles and taken captive into an unknown land. In a flashback, she turns around and walks away from a stumped Ronobir. The end of the video is one single gun-shot, with a little girl’s voice, softly advising, “Walk alone my friend”!

Aesthetically composed by Rahul Ranadip and penned by Aasif Moyal, this Rabindra Sangeet ballad is sung by Rahul Mukherjee, Pooja Shankar, Ranadip Bhaskar and Nishan Gupta. The ZEE5 Original, directed by Ken Ghosh and financed by Ekta Kapoor, is slated to release on the leap day 29 February 2020. Stay tuned for It Happened In Calcutta!

Why Do All Men Cheat? Here's How The Latest ZEE5 Original Shukranu Tackles This Question