Jiten Lalwani On Kahat Hanuman Jai Shri Ram: I Am In Awe Of Ekagrah Dwivedi Aka Maruti!

Exclusive Interview! King Kesari aka Jiten Lalwani opens up about his long journey on television and mythological role of Maruti's father! 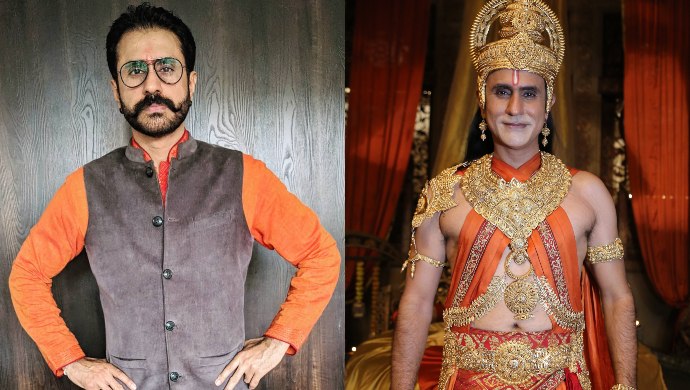 Since his debut in 1993, television actor Jiten Lalwani has played a plethora of roles! Currently seen as Maharaj Kesari on Kahat Hanuman Jai Shri Ram, airing on &TV, Jiten plays father to Maruti (Bal Hanuman), essayed by child actor Ekagrah Dwivedi. Born a vaanar, Kesari married Anjani Devi, who is an apsara-turned-vaanari, played by Sneha Wagh. On 11 March 2020, Ekagrah’s 5th birthday was celebrated on the set of the show in Naigaon, Mumbai, and Jiten Lalwani was kind enough to grace the occasion. He shared more about his character and favourite co-stars in an exclusive interview with ZEE5:

1. You started acting in 1993. How has your long journey on television been so far?

TV has evolved! Right from the sets, back then we used to shoot on sets made of sticks. Then we started shooting in bungalows and real locations. The performances have also changed. Earlier we used to act dramatically, now it’s more natural and behavioural. A lot of research and detailing go into sketching out the characters now!

2. How is Kahat Hanuman Jai Shri Ram different from all the other serials you have done before?

Firstly, I haven’t done mythological roles much. Secondly, I feel immense positivity while doing this show. Kesari is a very pure character and has no lies, anguish, or sin in him! So, I felt good that in today’s world, I’m able to essay such an innocent man. And playing father to Maruti was something I took as a challenge!

3. Who is your favourite co-star on the set, out of Ekagrah Dwivedi and Sneha Wagh?

Most of my scenes are with Ekagrah and Sneha both together. But acting with Maruti is different fun in itself. We interact more and have a great friendship and love between us. I would describe our bond in one word as a family!

4. Though they are brothers, Kesari and Bali are opposite characters on the show. How is your bond with Nirbhay Wadhwa on the set?

As a co-star, I get inspired by him! In terms of the physique that Nirbhay Wadhwa has made, I take a lot of tips from him. I ask him about his workout schedule, diet, maintaining his body, daily routine, sleep-cycle, basically everything!

5. What is one thing that you love doing the most on the royal set?

I love it when I address the subjects in my court. Sitting on my throne, when I have 25 people in front of people and I’m delivering a speech, I feel like a king! And secondly, when we do scenes with Maruti (Ekagrah), we sometimes laugh out looking at his innocence and cuteness. And I feel that an actor should always retain his innocence. Otherwise, the audience makes out that he/she is not innocent and is just acting!

6. Is there a specific kind of preparation that you undergo to portray a pure and innocent role like this?

I always try to get into a meditative mood before shooting. It’s a set after all and there are 25 things that could go wrong, but 10-15 minutes prior to the shot, I try to forgive and forget everything. I try to work with calmness and concentration (ekagrata) with Ekagrah Dwivedi (laughs)!

7. How is your experience of getting ready for King Kesari with the prosthetic vaanar make-up, hair, and jewellery?

I’m very restless with make-up! Women have a rare quality called patience, especially their make-up is getting done. They can sit even for 2-3 hours straight. I don’t have so much of patience in me honestly! Within 10-15 minutes I start saying, “Do it fast, finish it now!” When it’s taking time then I play music or listen to Hanuman Chalisa. Otherwise, I actually sleep off and ask them to wake me up when the make-up is done!

8. What do you think of Ekagrah Dwivedi’s (Maruti) performance as a child actor?

For him, at 5 years old, facing the camera is a huge thing in itself. He’s delivering such difficult dialogues in shudh Hindi, so whatever he does, we are in awe of him always. When we were 5 years old, we couldn’t even wear our pants (laughs)! He takes the limelight in front of so many people and speaks such long lines. Sometimes we or the assistant directors help him, but besides that, he also owns his character and gives himself into it. He surprises us every day on the set!

9. What do your family and actor-daughter Palak like about your role and the show?

Honestly, they don’t watch my show (laughs)! Sometimes I catch hold of them to make them watch it. But whatever reasons, my children who are grown-ups now, are inclined towards web series on the English OTT platforms more. Then they say, “Arre papa, we don’t want to watch TV anymore”. But they like it when they watch it sometimes.

10. You’re doing mythology currently. What other genres would you like to explore now?

I want to do a web series now. I want to explore the OTT space as well.

In between, we had done a story that was revolving only around Kesari and his promise (vachan). So that bit was really memorable and fun for me because I was the focus. And another would be a sequence we had shot before Maruti was even born on the show. Its screen-time was 1-2 minutes only, but we spent 5-7 days shooting it in the mountains! It was a complete adventure as we wore harnesses, jumped off the hills, dived into the water and saved people. It was a double excitement because we were filming for real and there were VFX (visual effects) also. We jumped into a swimming pool but when you see on TV, we dived into a sea. The experience of getting wet, coming out and retaking was fun. We had worked really hard!

Mentalhood's Karisma Kapoor Gives Her Opinion On Being A 'Tiger Mom'

Did Luck Mean Everything? 10 Untold Survivor Stories Of People Who Escaped 26/11 Attacks