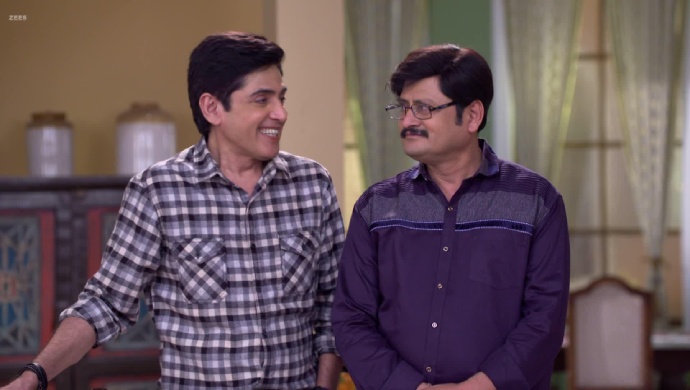 Bhabi Ji Ghar Par Hain! is undisputedly the most popular serial on &TV. Starring Rohitashv Gour as Manmohan Tiwari and Aasif Sheikh as Vibhuti Ahuti Narayan Mishra in the lead roles, the story revolved around two neighbouring couples living opposite each other in Modern Colony, Kanpur (U.P.). As the name of the show suggests, the two bhabis are Angoori Tiwari and Anita Vibhuti Narayan Mishra, essayed by Shubhangi Atre Poorey and Saumya Tandon respectively.

The men never miss a chance to plonk themselves at each other’s house and constantly flirt with the opposite wives. Have you ever imagined what would happen if Tiwari ji and Vibhuti ji swap roles and behave like each other? Look at the plethora of weird possibilities:

But first, watch the latest episode of the comedy daily-soap:

1. They would flirt with their own wives!

If Tiwari becomes Vibhuti and Vibhuti becomes Tiwari, wouldn’t they flirt with each other’s original wives already? Of course, they will! And call it the best or worst part, but they won’t even have to find excuses to do so because Angoori bhabi is Tiwari ji’s and Anita bhabi is Vibhuti ji’s default wife. This way both of them would be on top of the world to achieve their single age-old dream they have been yearning for.

2. Kaccha-banyan and nalla would interchange!

Tiwari ji runs an undergarment business, thus he is mockingly called kaccha-banyan. Vibhuti, who is the self-proclaimed topper of Chhapra University, is actually jobless! He is addressed as nalla, meaning useless, by Tiwari. Now, if they switch roles, Vibhuti will be called kaccha-banyan, but will also have a job! Poor Tiwari will go bankrupt with the name and traits of a nalla!

On the show, Tiwari and Vibuti have a constant longing of being at their respective bhabi’s house. If these men reverse their characters, they will sit in their own houses, wooing their own wives 24/7! Fortunately or unfortunately, Angoori bhabi and Anita bhabi, both will miss a voice that used to ask, “Bhabi ji ghar par hain?”, meaning “Is bhabi ji at home?”, every now and then!

4. Vibhuti’s poetry and Tiwari’s singing will find a new direction!

Vibhuti ji is a flamboyant poet at heart! Assured that he won’t stop writing and reciting poems even after switching characters, the new Tiwari would dedicate his shayari to his wife Angoori. In the same manner, Tiwari ji sings for Anita bhabi sometimes. Only now, the latter would be sung to by the new Vibhuti! Confused? Don’t be! Nothing else matters as long as Vibhuti and Tiwari are happy!

Well, even if Tiwari becomes Vibhuti and gets to lawfully flirt with Anita, and even if Vibhuti becomes Tiwari to legitimately love Angoori, men will be men after all! And have you heard that the grass is always greener on the other side? Yes, right! So, despite switching roles and achieving their far-fetched dreams, the new Vibhuti would still be flirting with his new bhabi Anita and the new Tiwari would still be eyeing his new bhabi Angoori!

Mentalhood Gets A Phenomenal 9.3 Rating On IMDb, Critics And Audience Give A Big…

To watch such quirkiness unfold, stay tuned to all the episodes of the &TV show Bhabi Ji Ghar Par Hain! streaming on ZEE5 now!

From Monsoon Shootout To Aisha, 9 Fresh New Films On ZEE5 You Should Not Miss Out On