The rakshasas play their new trick on Raja Kesari by giving him an impossible challenge. Find out in details inside. 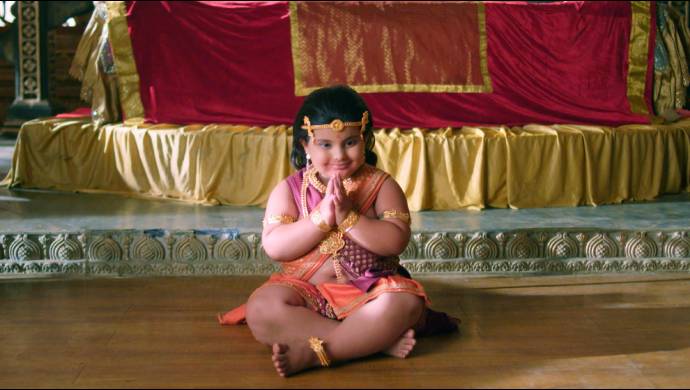 In tonight’s episode of Kahat Hanuman Jai Shri Ram, we see that the rakshasas have entered different quarters of the palace to kill the people and chop off their fingers. Maruti is busy praying to Mahadev, as he writes Ram on the bells and begins to ring them. The noise of the bells can only be heard by the rakshasas and it gets so loud, that it becomes intolerable for them. Soon, the rakshasas see a hive of bees flying towards them. They run away from the palace after getting attacked by the bees. After running out, they get tangled in the creepers of a tree.

The next morning, Anjani and Kesari Maharaj think that the rishis have met with an accident the previous night. They take the injured rishis inside the palace again for their treatment. When Maruti meets the rishis, he chants Ram’s name. The rakshasas remember that the previous night they had also heard Ram’s name and come to know, that it was Maruti who had tied them to the tree. To confirm the same, the rishis challenge Maruti to call his aradhya for lunch. Maruti attempts the same and soon, a huge colony of ants starts crawling towards the food which was served for Ram. The ants work as a team and spell out Ram’s name, near the food. The rakshasas are shocked. The next morning, they ask Raja Kesari to make them a promise.

In the upcoming episode of Kahat Hanuman Jai Shri Ram, we will see the rakshasas playing their new trick on Raja Kesari, by threatening him saying that if he cannot provide them with the strongest vehicle on this planet, he should kill himself. On the other hand, Maruti swears that if his devotion towards Ram is real and honest, then no sunset shall take place on the planet, till his feet are placed on the ground.

Will Raja Kesari be able to complete his promise? Find out on Kahat Hanuman Jai Shri Ram streaming on ZEE5.