In tonight's episode, Maruti frees himself from the cage and sets out to rescue Chagan, Magan and Bandhu. Later, Singhika and Maruti have a face-off! 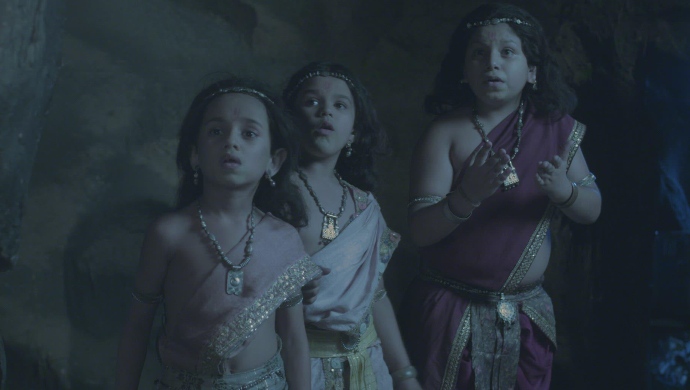 In tonight’s episode of Kahat Hanuman Jai Shri Ram, Maruti wakes up and plans that he needs to get out of the cage in order to save the people of Sumeru. He cries out “Jai Shri Ram” and breaks the cage door open with his gada. He then goes ahead in search of others enslaved by Singhika. Entering a tunnel, he finds his friends Chagan, Magan and Bandhu lying unconscious in a huge cage.

Maruti tries to wake them up by yelling their names. Breaking the cage door, he goes inside the cage and shakes them vigorously but in vain. Then, Maruti kneels and prays to Mahadev. Chagan, Magan and Bandhu wake up and are happy to see Maruti. The four of them and hug each other. When they try to escape, two of Singhika’s guards hear them. They hide and Maruti throws a stone in another direction to distract the guards.

When the guards catch Maruti, he hits them with his gada and they fall down. When Maruti is searching for his people, Singhika appears in front of him suddenly. She identifies him as the elusive flying vaanar and declares that Maruti is trapped in her cave for life because nobody can escape it without her permission. Maruti threatens her that she will not harm the Sumeru residents, nor even lifts her evil eyes at them. Then, Singhika and Maruti have a face-off.

Maruti attacks Singhika with his gada but she disappears and changes her position. With her magic wand, she drops Maruti gada from his hand. Maruti’s friends are extremely scared. He later wonders whether he made a mistake by entering Singhika’s cave. Singhika confirms his doubt by saying that he has realised his fault but it is too late now. Singhika announces that she will kill Maruti right away!

Harleen Sethi On Broken But Beautiful Season 2: Sameera Made Me Emotionally…

In the upcoming episode, after teaching Singhika a lesson, Maruti gets extremely hungry and wants to eat the sun. He believes it to be a divine fruit (divya phal). He takes a huge leap and flies to the sun. Anjani and Kesari are astounded to see this. When he reaches it, he enlarges himself to match the sun’s size. He then opens his mouth to engulf the sun. Later, a reflection of Mahadev is seen on the sun.