In tonight's episode, Maruti ties Singhika up with his tail and teaches her a lesson. Shukracharya issues a challenge to Indra for Singhika's hurt. 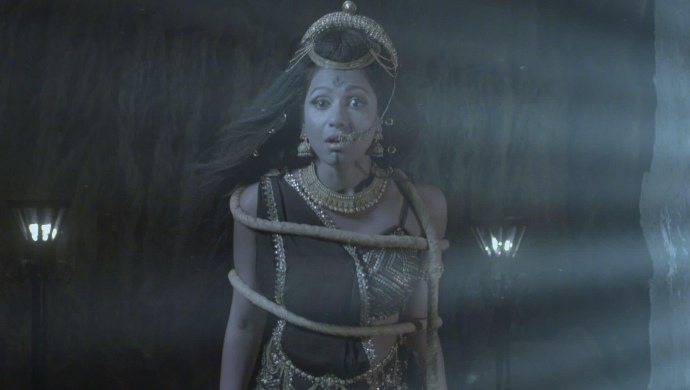 In tonight’s episode of Kahat Hanuman Jai Shri Ram, when Chhaya Shikari Singhika threatens to kill Maruti, he elongates his tail and ties Singhika up with it. Singhika is astonished to see that this elusive vaanar child has special powers. Maruti tosses Singhika left and right with his tail. Exhausted by the pain, Singhika promises Maruti that she will free all the prisoners and will return to the land of Sumeru!

When they come out of the cave to meet their parents, Maruti tells Chagan, Magan and Bandhu to pretend as if they have regained consciousness just now. Maruti’s parents look at him and Anjani gives him a tight hug. Maruti’s friends’ parents also hug their respective children. Meanwhile, Guru Shukracharya appears to Singhika and tell her that she has landed on the planet Shukra (Venus).

Maruti meets his vaanar kaka who tells him that he has witnessed everything from the beginning of vaanar raj. He prays to Mahadev to bless Maruti. Shukracharya senses that Singhika is upset. When asked, she reveals everything about her face-off with Maruti to him. She also says that rakshasas have become weak because Vishnu has always defeated them by deceiving them. Singhika was not always an asura!

Shukracharya listens to Singhika’s sob story of how her son Swarbhanu’s head was chopped off by Vishnu’s sudarshan chakra. She also reminds him of the samudra manthan incident. Agitated by the state of asuras, Shukracharya declares that he will be the king of the world one day. He goes Devraj Indra and threatens him that Singhika will usurp his throne and all the devas will be left standing there in silence!

In the upcoming episode, after his victory, Maruti goes to Mahadev, who gives him a fruit to repay his debt. Maruti relishes the delicious offering. He then looks at the sun and wonders that it is the enlarged form of the same fruit. He desires to eat the sun and takes a huge leap to fly to outer space. Anjani and Kesari are astonished to see their little boy flying so high! Will Maruti taste the sun?

What Happened To The Escaped Convicts After The Infamous Nabha Jailbreak In 2016?