In tonight's episode, while Maruti and his friends are busy binging on sweets, Mahadev appears to him disguised as baba and gives him a divine fruit! 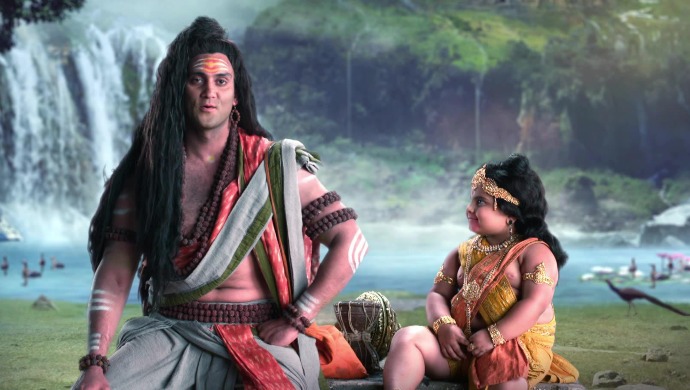 In tonight’s episode of Kahat Hanuman Jai Shri Ram, Surya Dev goes to Indra Dev and tells him that because of Raahu’s actions, the Earth will be afflicted with a solar eclipse. This will cause inconvenience to humans as they depend on sunlight. Surya Dev assures that he will teach Rahu a lesson and put an end to this. Meanwhile, Anjani explains to Maruti what is a solar eclipse and why do they fast on that day!

Surya Dev goes to talk to Rahu but instead gets threatened by him. Rahu says that Surya Dev may do whatever he wants, but the asuras are also ready to defeat the devas and drink their blood. Rahu then disappears in front of Surya Dev’s eyes. Mahadev raises this concern in dev-lok with Parvati and says that Surya Dev is swelling with pride. On being asked what will he do, Mahadev decides to repay Maruti’s debt!

Rahu goes to Shukracharya and makes him aware of his conversation with Surya Dev. Shukracharya reveals that he has undertaken a resurrection study and can bring any dead rakshas back to life! This will be a trait of all the asuras. On the side, Maruti and his friends hold a sweet-eating competition among themselves. They go to market and binge on all the delicious Indian desserts that the confectioner had!

While at it, Maruti hears the sound of a damru (small drum) and recognizes the baba who had met him once. He is none other than Mahadev himself in disguise. They sit on a rock and Mahadev gives Maruti a divine fruit to repay his past debt. Maruti gobbles the fruit and loves it. Later, Indra Dev meets Surya Dev and says that he will not let the devas be humiliated. Surya Dev’s respect is everyone’s respect!

Mentalhood Review: A Charming Yet Compelling Look At The Many Faces Of…

In the next episode, Shukracharya readies an army of asuras to wage a war against the devas. Surya Dev also prepares his soldiers and asserts that victory will be theirs! Maruti looks at the sun and thinks of it as the enlarged divine fruit. He leaps high and flies to outer space. When he opens his mouth to swallow the sun, a blanket of shadow covers the earth. Will Maruti bring a solar eclipse?

QUIZ: 5 Types of Mothers In Mentalhood That Will Remind You Of Your Own Mom