In tonight's episode, after eating the divine fruit given by Mahadev, Maruti cannot satisfy his hunger with anything else and sets out to eat the sun! 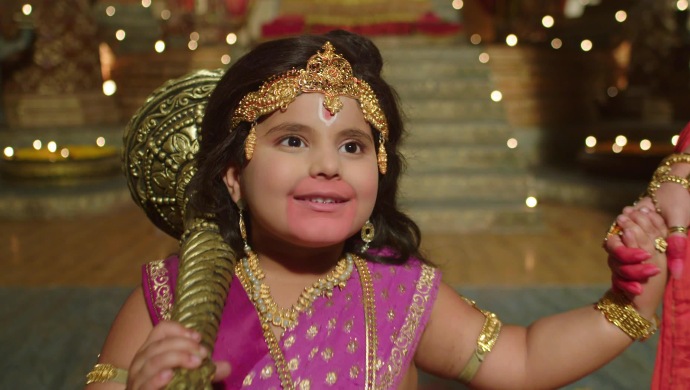 In tonight’s episode of Kahat Hanuman Jai Shri Ram, Indra Dev addresses all the devas in his court about the war against evil. Shukracharya declares that Rahu will wrap around Surya Dev and bring the worst solar eclipse on Earth ever! He announces that massive darkness will blanket the humans, giving Shukracharya authority over everything. To execute his plan, he raises an army!

In competition with his friends, Maruti gobbles up all the sweets available at the shop. He says his hunger is not being satisfied at all since he ate the divine fruit that bhole baba (Mahadev in disguise) gave him. Chagan, Magan, and Bandhu are astonished to see his sugar intake. Maruti feels even hungrier and peeps into a stranger’s house from which he can smell kheer.

Brahma speaks to Mahadev about Maruti’s problem. His hunger has become a big concern because the divine fruit has done its job in Maruti’s tummy! Maruti goes home where Anjani Devi feeds him more. Then Anjani has to go for a pooja because she is fasting for the solar eclipse. But Maruti wants to eat even more, which delays her pooja. When Anjani leaves, Maruti looks at the shining sun from the window.

He thinks that the sun is the real, big divine fruit! Wanting to swallow the sun, Maruti takes a giant leap and starts flying towards outer space. Meanwhile, Surya Dev and Indra Dev have readied the army of devas to fight against the asuras and avoid the dangerous solar eclipse. Surya Dev declares that after attaining victory, all the humans will bow down before him. Mahadev and Parvati watch from above.

QUIZ: 5 Types of Mothers In Mentalhood That Will Remind You Of Your Own Mom

In the next episode, while on his way, Maruti encounters a snake rakshas who blocks his path to the sun. When the rakshas pounces upon him, Maruti lifts his gada and swings it at him. When Maruti reaches the sun, a reflection of Mahadev is visible on it. He opens his mouth wide to swallow it. Will Maruti be successful?

Watch Karisma Kapoor And Co. Talk About Their #Mentalhood Journey In An Exclusive Chat