In tonight's episode, Hanuman (Maruti) celebrates his fifth birthday with his mother Anjani, who tells him to perform a puja for Pawan Dev. 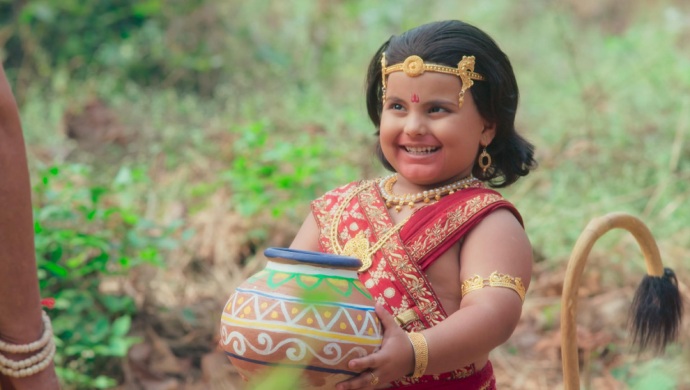 In the previous episode of Kahat Hanuman Jai Shri Ram, Baali puts the poison in the kheer with Anjani ends up eating. She is immediately affected by the poison. Lord Shiva tells Parvati that this is part of his plan for Hanuman. When the poison is not treated by Anjani’s doctor, Kesari begins asking Lord Shiva for help. However, Lord Shiva says he cannot do anything about this till Vishnu grants him the powers. Shiva draws the powers from Vishnu and then immediately removes the poison from Anjani’s system. Baali thinks he succeeded in killing Anjani’s baby, but when he goes to her room he is surprised to find that she gave birth to a child.

In tonight’s episode, it’s five years after Maruti’s (Hanuman’s) birth. He has managed to win the hearts of everyone in the palace. However, it is a big problem to wake him up. Lord Shiva says that his avtar will not get up from his sleep till his mother Anjani wakes him up. Anjani goes to Maruti’s room and starts waking him up very lovingly.

Maruti wakes up and hugs his mother. She tells him to get ready to celebrate his fifth birthday by preparing for a puja. Maruti wants to play with his friends but Anjani insists he finishes his puja first. When Anjani leaves, Maruti goes back to sleep. When his friends visit him, they gift him a mango to wake him up and seek his help in stealing a tree full of ripe mangoes.

Maruti goes out to steal the mangoes but Anjani finds him first and takes him to the puja. The Rishi tells Maruti to carry a pot full of holy water and circle the mountain of Pawan Dev. After that, he asks him to release it at the peak of the mountain. Hanuman says he doesn’t want to worship Pawan Dev because there is a greater god right next to him.

Makar Sankranti Special: A Short Tale Of Hanuman And The Sun God Surya

In the next episode, Hauman tells the Rishi that instead of worshipping Pawan Dev he wants to worship his mother. How will the Rishi react to Hanuman’s demand? Finds out tomorrow. Watch the latest episodes of Kahat Hanuman Jai Shri Ram, streaming on ZEE5.