Hanuman outwits and defeats Mahabali Rahu. He continues on his journey to eat the sun. There, he meets Agni dev and is challenged to a battle! 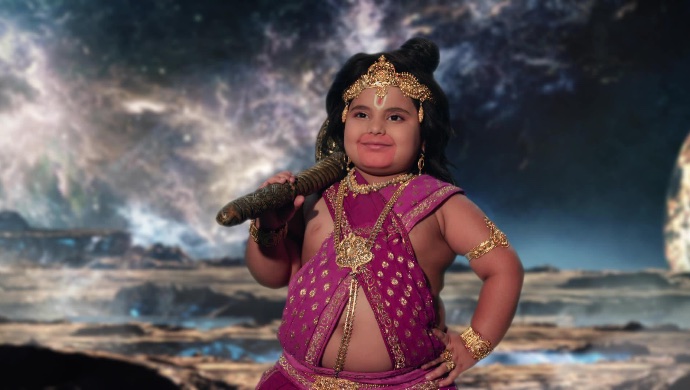 In tonight’s episode of Kahat Hanuman Jai Shri Ram, Hanuman tries to eat the sun but a rakshas blocks his path and pounces upon him. Hanuman insults the god of rakhshasas, Mahabali Rahu, who attacks him. Hanuman lifts his gada and swings it at the rakshas. Mahabali Rahu then uses his most powerful weapon: poison. Hanuman runs away but the poison follows him. He decides to go through the army of rakhshasas so they get affected and die from the poison. Mahabali Rahu is enraged to see his army dying by his own poison. He attacks Hanuman with his weapon but misses. Then Hanuman swings his gada again and flings him far away.

Hanuman continues his journey towards the sun, still wanting to eat it.

Goddess Parvati gets amused at the sight of Hanuman defeating Rahu. Nandi says that Hanuman just didn’t defeat him but gave him what he deserves. Mahadev too says that this is also one of the reasons Maruti has taken an avatar on Earth, to help free people from bad times and bad people.

Hanuman increases his speed to reach the sun. Whereas on the other side, all the lords including Agni dev, Vayu dev, Vastra dev along with Devraj conspire against Rahu so that he leaves Devlok permanently.

The priest says to Maharaj Kesari and Devi Anjali that solar eclipse is going to happen in a while. Devi Anjali waits for Maruti and asks her helper to get him from his room. Hanuman knows that his mother is waiting for him so he speeds up even more. When he gets close to the sun, he sees Agni dev. He asks Hanuman the reason behind his coming there. Hanuman says because he is hungry and he wants to eat the sun. Agni dev gets angry listening to him and tells him to go away. Hanuman requests him to let him eat it. Agni dev challenges Hanuman to a battle if he wants to eat the sun and Hanuman accepts the challenge.

Shukranu Review: Divyenndu Shines In This Tasteful Film About A Tricky Subject

In next episode, Hanumans eats the sun and the world is shrouded in darkness. Devraj gets really angry to see this and goes to Hanuman to punish him. Will Devraj be successful in punishing Hanuman?

Naghma Rizwan Of #ItHappenedInCalcutta: I Couldn't Talk For Hours After The Abortion Shot