Bali is determined to kill Maruti and so he plans to trick Maruti to an isolated spot. He strikes his first move. Details below 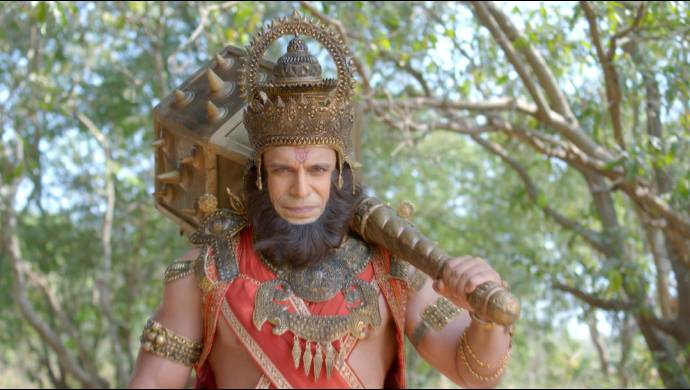 In tonight’s episode of Kahat Hanuman Jai Shri Ram, we see Maruti telling Bali that he needs to control his anger and also needs to go off his chariot. Bali shouts at him, asking him if he knows who he’s talking to. Maruti replies to him saying that he doesn’t know his exact identity but knows that Bali is very arrogant and egoistic about his strength. Bali ridicules Maruti for questioning him about his identity. Maruti tells Bali that he is the prince of Sameru town and the son of Anjani and Raja Kesari.

Knowing that his target is in front of him, Bali doesn’t know how to react. He lets Maruti to leave. The latter and his friend Bandhu, decide to go to a nearby river to have a bath. They are followed by Bali throughout. When Maruti and Bandhu get into the water, they are unaware of the fact that a group of crocodiles is swimming their way to kill them. Seeing the crocodiles, Bali is delighted and assured that this is the end of Maruti.

When the crocodile comes close to Maruti to attack him, the latter catches its tails, swings it around and throws the creature away. Maruti shows off his strength to Bandhu, who is very happy to see that his friend is getting stronger. However, Bali who is hiding behind the bushes, watches all this and is shocked to see a small kid showcasing such strength. Bali is determined that he will not keep calm unless and until he kills Maruti.

Later, Anjani and Raja Kesari introduce Maruti to Bali, telling him that the latter is his uncle. Bali is eager to kill Maruti but his helplessness stops him.

4 Scenes In Phobia Where Radhika Apte Outdid Herself

In the upcoming episode of Kahat Hanuman Jai Shri Ram, we will see Maruti fascinated with Bali’s gadha, and telling him that even he wishes to own a stronger gadha someday. Bali tells him that there is one such gadha in patalyog and gives him directions, that would lead him to an isolated den. When Maruti follows the route and reaches the entrance of the den, Bali appears behind and strikes the ground, in turn creating a hole, that Maruti falls into. Has Bali ended Maruti’s life? Find out on Kahat Hanuman Jai Shri Ram.

For more fun and entertainment, watch your favorite shows on ZEE5