In tonight's episode, Maruti saves his friends from the Rakshas Divyakarn and then uses his powers to defeat the demon. 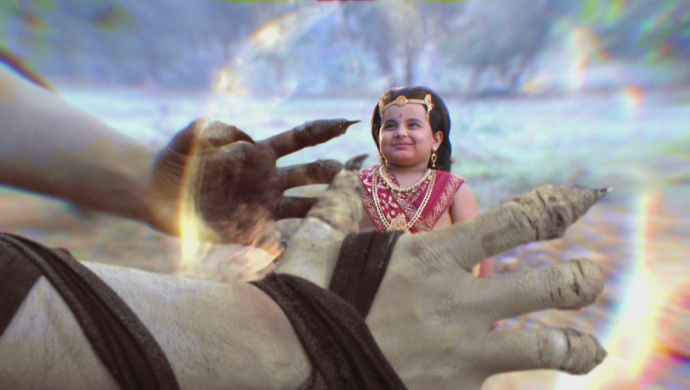 In the previous episode of Kahat Hanuman Jai Shri Ram, Maruti and his friends find a man whose duty is to collect mangoes and take all of them to the King. Maruti decides to steal all those mangoes before they are taken to serve the King. Maruti jumps from tree to tree and all the mangoes fall down. The mango who collects mangoes witnesses this and tempts Maruti to go into Rakshas territory to get the best mangoes in the world. When Maruti goes there with his friends, they are caught in a trap and the Rakshas Divyakarn walks towards them.

In tonight’s episode, Hanuman uses a knife to break through the trap. Before the Rakshas can eat his friends, he manages to free them too. Maruti tells his friends that he can easily defeat the Rakshas because he believes that he can. His friends ask him to come back to the palace with them. While his friends run away Maruti charges towards Divyakarn.

He hears the screams of the mango picker who wanted to trap them. He finds that Divyakarn is trying to eat the mango picker. Maruti picks up a rock and throws it towards Divyakaran. He drops the mango picker, who runs away scared. Jambavan who is supposed to guard the borders of the Vanar Kingdom finds Maruti’s friends and finds out that Maruti has gone to fight the Rakshas.

Maruti challenges Divyakarn to fight someone with equal power. Divyakarn tries to attack Maruti but there is a protective shield stopping him from even laying a finger on Maruti. Jambavan sees this and gets surprised. Maruti then jumps in the air, lifts Divyakarn and throws him back into Rakshas territory. Jambavan is convinced that Maruti has special powers.

Exclusive! Arjun Bijlani: I Smile Most Of The Times But Not Necessarily Because…

Maruti goes back to the palace for his birthday celebrations. He is feeding a herd of cattle from which one bull uses his horns to throw Maruti in the air. Watch the latest episodes of Kahat Hanuman Jai Shri Ram, now streaming on ZEE5.