In tonight's episode, Maruti sets out on his pursuit to eat the divine fruit. He defeats the army of devas obstructing him and swallows the sun! 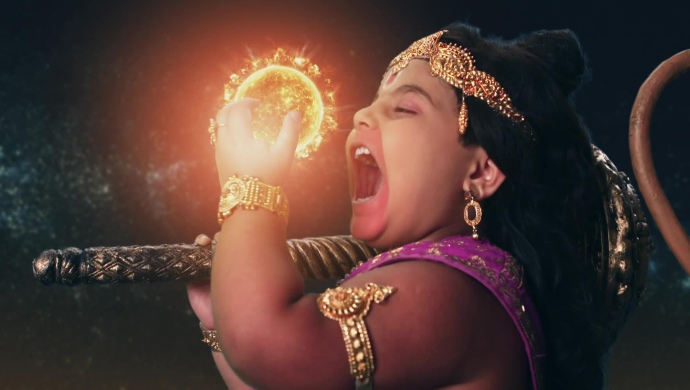 In tonight’s episode of Kahat Hanuman Jai Shri Ram, Maruti is on his way to satisfy his hunger by tasting an enlarged form of the divine fruit that bhole baba (Mahadev in disguise) had given him. En route, he faces a chain of obstacles in the form of the deva sena – the army of the devas. First comes the messenger of Indra Dev and attacks Maruti, who counterattacks with his gada and takes off!

A little ahead, Maruti faces Varun Dev – the god of oceans, who doesn’t let him pass through the wall of water. Maruti slyly elongates his tail and ties Varun with it. Unable to move at all, Varun begs Maruti to leave him alone. A smart Maruti puts forth a condition that Varun will let him continue on his pursuit. The latter concedes defeat and Maruti cuts through the wall with his gada to make way for his will and hunger!

When Maruti is almost reaching the sun, Vayu Dev looks at him and feels proud as he had taught Maruti to fly! Maruti lands in front of the sun and Surya Dev appears in front of him. After a bit of brawl, Maruti magnifies himself and holds the sun in his palms. He opens his mouth wide and swallows the sun in one gulp! Maruti begins to glow from within and the sight is enjoyed by Mahadev and Parvati, looking from above!

Darkness blankets the earth and worries Anjani and Kesari who were in the middle of a yagya, the fire of which is suddenly extinguished. Surya Dev, who is inside Maruti’s tummy, tries to burn and burst out of Maruti with all his might. But Mahadev appears to him and says that the vaanar child is none other than his own avatar, Maruti! When Surya Dev and Indra Dev learn the same, the former apologises but the latter becomes furious!

#StateOfSiege2611: 7 BIG Mistakes That Led To A Prolonged Terror Attack In…

In The World Of Gender Defined Roles, Mentalhood Teaches Us The ABCs Of Gender…

In the next episode, Indra Dev strikes Maruti with his lightning bolt, and Maruti falls to the ground for the first time. Vayu Dev tries to revive an unconscious Maruti by gathering breath from all the living beings on earth. In the bargain, Anjani, Kesari, and all of Maruti’s palace dwellers start to choke and collapse! Will Maruti regain consciousness and save his family?