Maruti reaches Bali's palace to watch the competition. However, the latter has different plans for Maruti. Details inside. 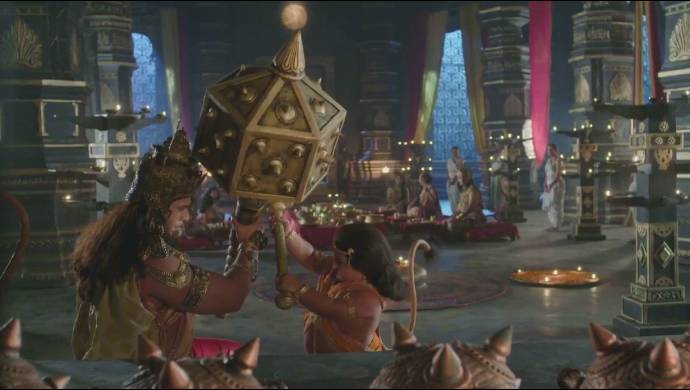 In tonight’s episode of Kahat Hanuman Jai Shri Ram, we see Bali’s father appearing in front of him and guiding him on how he can kill  Maruti. His father narrates the story of Yaksraj Kuber. He tells Bali that once upon a time, Yaksraj Kuber was followed by the guards as he had stolen something. To hide away from them, Yakshraj entered Mahadev’s temple. He sensed some supernatural powers there and started praying to Mahadev, even though he was an atheist. Yaksraj then pledged his devotion to Mahadev for the rest of his life. Impressed by his devotion, Mahadev gifted him a gadha. His father tells Bali that he should tempt Maruti with this gadha and plan to kill him.

Later, Maruti requests his parents to let him go to Bali’s palace as he wants to witness the gadha competition. Looking at Maruti’s enthusiasm, his parents happily agree to let him go, only on the condition that Maruti will not trouble anyone in the palace. When Maruti reaches Bali’s palace, the latter is very tempted to kill him then and there itself. He views Maruti the same way a lion, looks at its prey.

Seeing Maruti, Roma kaki greets him in joy and tells him to eat food and take some rest. She tells him that later, she will take them to watch the gadha competition. However, Maruti insists that he wants to see the competition first and only then will he have some food. Looking at Maruti’s eagerness, Roma kaki agrees to take him for the competition. When Maruti sees Bali fighting during the competition, he is impressed and appreciates the latter’s strength and tactics. Bali is happy to see his prey right in front of him.

Shah Rukh Khan And Salman Khan To Have A Great 2020? Astrologer Anupam Jolly…

In the upcoming episode of Kahat Hanuman Jai Shri Ram, we will see Maruti telling Bali that he wants the same gadha as his. Bali however, tells Maruti that there is more powerful gadha in patalyog. He directs Maruti towards a den. When Maruti reaches the entrance of the den, Bali appears from behind and strikes the ground, which creates a hole that Maruti falls into. Bali too enters the hole in the ground and tells his Maruti that he’s about to get killed.

For more fun and entertainment, watch your favorite shows on ZEE5.