In tonight's episode of Kahat Hanuman Jai Shri Ram, we see that Maruti reaches patal-lok and begins his quest for the special gadha. Read more inside! 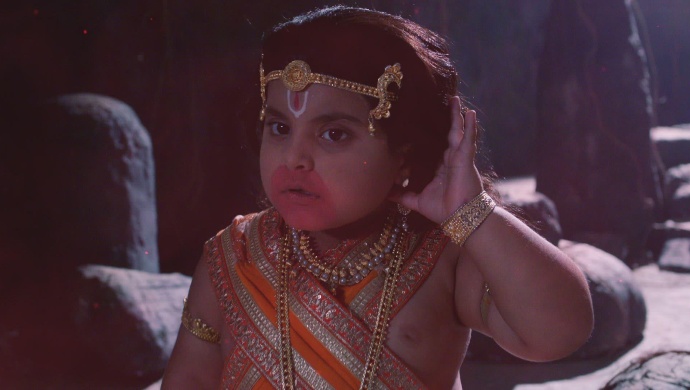 In tonight’s episode of Kahat Hanuman Jai Shri Ram, we see that Maruti’s gadha breaks while fighting with Bali. Even so, Roma Kaki praises him saying that he put up a good fight. But, Maruti expresses to Bali that he also wants a big and strong gadha like the latter’s. Bali reveals that there is a gadha, more powerful than his, in patal-lok. Bali tells Maruti that the place is not easy to reach with the help of an ordinary vaanar. But, he also tempts him by saying that the gadha‘s power amounts to that of an elephant. Maruti is adamant that he will go to patal-lok and acquire it. While having supper, Anjani is worried about him and senses that he might be in danger.

When Maruti reaches the entrance of patal-lok, Bali hits the ground and makes a pit with his gadha that Maruti falls into. Bali thinks to himself that Maruti will dig his own grave there. Unaffected, Maruti begins his quest for the extraordinary gadha when he hears classical music. Vasrasur forces a few women to dance before him, failing which, the rishis will have to pay the price with their lives. But, one of the rishis curses him saying that one day Mahadev will come and kill him for his sins. Right when the demon calls for a knife, Maruti wraps his long tail around him, due to which he is unable to move. With all his might, Maruti lifts him off the ground!

In the next episode, we see that Sudarshan Dev appears in front of Maruti and stops him from entering Bali’s kingdom aka rakshas rajya. But, Maruti tells him about his pledge of not leaving without the magical gadha. Sudarshan Dev feels challenged and boils with rage. But, Maruti says that he is very humble. Ignoring him, Sudarshan Dev transforms himself into sudarshan chakra and charges at Maruti. How will little Maruti save himself? To find out, keep watching all the episodes of Kahat Hanuman Jai Shri Ram, exclusively on ZEE5!

Nakuul Mehta And Anya Singh Reveal Secrets About Each Other In This Exclusive Video!