In tonight's episode, Indra Dev admits his mistake in front of Vayu Dev. Mahadev reveals the truth to the deva sena and Maruti is renamed Hanuman! 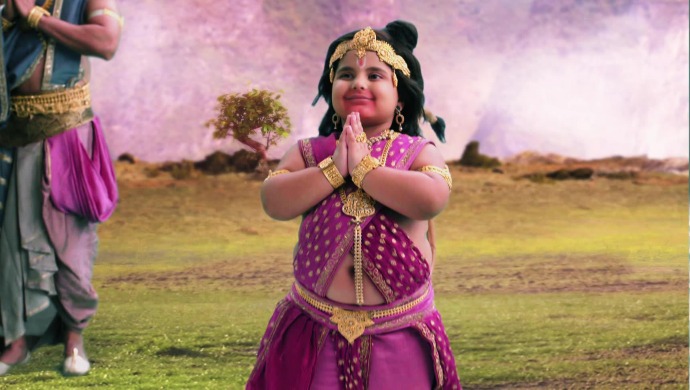 In tonight’s episode of Kahat Hanuman Jai Shri Ram, when Vayu Dev is trying to revive Maruti, Indra Dev arrives there with his deva sena. He admits to attacking Maruti with his most powerful weapon. Vayu Dev is furious to learn this and wants revenge upon Indra but is helpless because the latter is also a deva. Narad Muni appears and sees that Maruti is not breathing. Indra Dev is ready for any punishment!

Despite several efforts, when Maruti doesn’t regain consciousness, Vayu Dev says that he will also take his own life, blaming it on Indra Dev. The entire deva sena is terrified to hear this. Suddenly, Mahadev and Brahma Dev present themselves. While the latter assures that Maruti is not dead, the former announces to the deva sena that Maruti is not an ordinary vaanar child, in fact, he is Mahadev’s own avatar on earth!

To reverse the harm done, Indra Dev blesses Maruti and the deva sena follows suit. They shower Maruti with various boons such as immense power, unbreakable physique, immortality and more. Then Vayu Dev says that it is time for Maruti to open his eyes and receive a new way of life. Slowly but surely, Maruti wakes up and is surprised to see Mahadev. Indra Dev apologizes to Maruti again, who forgives him!

Vayu Dev is instructed to send back the breaths of all living forms that he had collected. Anjani, Kesari, and all the people in their palace come back to their senses. Indra Dev says that since his vajra had attacked Maruti’s jaw (hanu), now onwards, he will be called Hanuman! Maruti is extremely joyful and hugs Vayu Dev. But Shukracharya, Singhika and Rahu are up to some evil in order to protect the asura community!

Remembering 26/11: Photos And Facts About The Militants Behind 2008 Mumbai…

How To Deal With Bullies: A ‘Mentalhood’ Guide For Parents

In the next episode, Maruti goes back to his house to meet Anjani and Kesari. His aunt praises him for his new glow! But Maruti’s new enemy possesses his aunt who suddenly starts yelling. She says that Maruti’s family is treating her husband Mahavir Sugreev as a slave, but he is the heir of Kishkindha. Is Maruti about to face another danger?