Tonight, Maruti offends Shani Dev unknowingly by being blessed with divine powers by Indra Dev. Will his family now bear the brunt of Shani’s wrath? 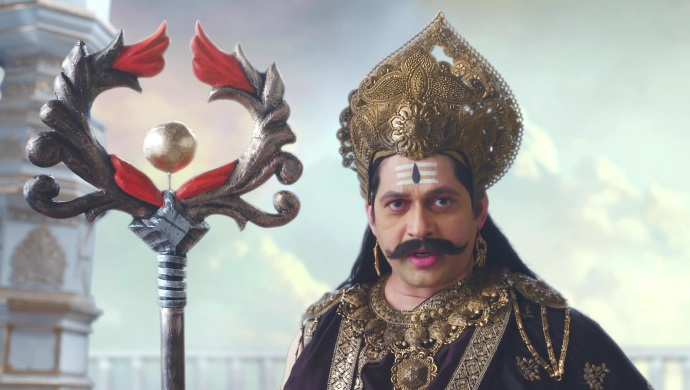 In tonight’s episode of Kahat Hanuman Jai Shri Ram, after being renamed Hanuman by Indra Dev and the entire deva sena bless Maruti with divine powers. This offends Maruti’s new enemy, Shani Dev, who was meditating when he sensed that a vaanar child on dhartilok had been rewarded. Shani Dev expresses to his wife that nobody apart from him has the authority to grant people the fruit of their deeds (karma).

Mahadev himself is the one who gave Shani the right to judge everyone according to their karma. When Shani is upset, Parvati fears that Maruti will be threatened again. Shani sets out to see Indra Dev. Maruti is also flying back home. The latter accelerates and cuts Shani’s path to offend him even further. Shani’s ego is hurt because nobody from devlok, dhartilok or patalok disrespects him!

Maruti enters his palace and calls out to Anjani. The latter runs to hug him tightly and checks whether he is alright. On being asked, Maruti replies that he was away only to eat the divine fruit in the sky. Kesari and Anjani breathe a sigh of relief while the latter admits that she will die of Maruti’s mischief one day. Maruti is startled and immediately covers Anjani’s mouth, stopping her from uttering anything negative anymore!

Shani Dev presents himself to Indra Dev and declares that his evil eye is now on Maruti’s life and family, blaming it on the deva sena’s offence! Shani says that everyone is accountable to him alone and it doesn’t matter even if Maruti is Mahadev’s own avatar. Known as the karma phal data, Shani puts his eye on the planet Mars to birth Amangal Dev, who is assigned to destroy Maruti and his family’s peace!

In the next episode, Shani is angry with Maruti and goes to his palace. When they are having a family gathering, Shani Dev possesses Maruti’s aunt, who falsely accuses Kesari and Anjani of treating her husband like a slave, whereas he is the heir of Kishkindha, Mahavir Sugreev! Everyone is stumped to see such a sudden shift in her behaviour. Will Maruti figure out what went wrong?