In tonight's episode, a sacrifice yagya is held at Kesari's palace after Maruti's return. He senses an evil spirit in the room when it leaves Roma! 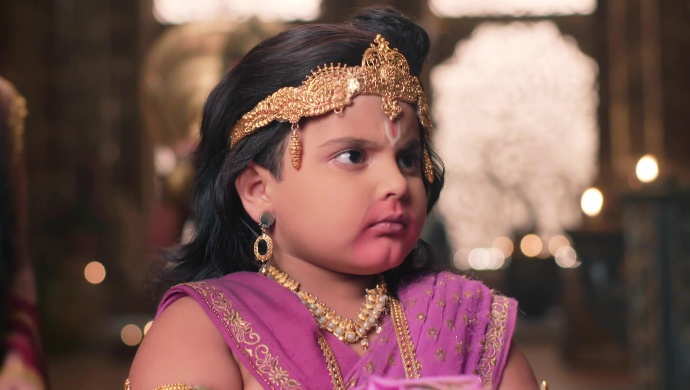 In tonight’s episode of Kahat Hanuman Jai Shri Ram, Maruti returns home after being blessed Indra Dev and offends Shani Dev unintentionally. All the relatives including Tara kaki, Roma kaki, and Mahavir Sugreev gather at Kesari and Anjani’s palace for a daan yagya (sacrifice ritual). Maruti meets Roma kaki who says that he is glowing even more after swallowing the sun. Maruti takes it as a compliment!

When Roma kaki says that her Maruti will catch her own evil eye, Maruti remembers Anjani’s words and says that loved ones can’t cast an evil eye. Still, Maruti hands her a small box of kohl and says that whenever Roma kaki and Tara kaki meet him, they bless him with a black spot of the kohl! Then, Kesari asks Tara kaki to start with the yagya but she suggests that Maruti should go for it because he is blessed!

Suddenly, an evil spirit enters into Roma kaki and her eyes turn red. She starts yelling at Maruti and his parents when he is handed the daan yagya plate. Falsely accusing them, she says that her husband Mahavir Sugreev is being treated like a slave, whereas he is the heir of Kishkindha! When she steps forward to snatch the plate from Maruti, she falls down and Maruti senses a shadow leaving Roma kaki’s body!

Later, Anjani is upset about Roma kaki’s behaviour but Kesari tells her to forgive and forget. Maruti is lying on his bed and pondering upon whether he actually saw a shadow or was it his imagination? From a distance, Shani Dev looks at Maruti and thinks out loud that the vaanar child has felt the presence of Amangal, the asura sent for Maruti and his family’s destruction! Shani Dev declares that no one can save them!

In the next episode, Amangal possesses Maruti’s father Kesari and uncle Sugreev. Both of them start quarrelling with each other over the lands of Kishkindha and Sumeru. Kesari says that he will come back with a cruel answer. And Sugreev says that Kesari will see his extreme wrath (raudra roop)! Will Maruti save his family from Amangal’s terror?

Before #ZCA2020, A Throwback To Best Movies And Speeches At Zee Cine Awards…

5 Nutritious And Healthy Recipes For Your Kid, Taking Cues From…