In tonight's episode of Kahat Hanuman Jai Shri Ram, Maruti obtains the special gadha, breaks the cave's rock and comes back to his family. Read more! 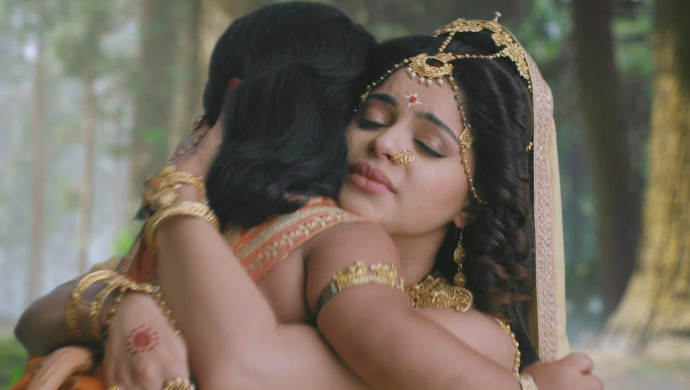 In tonight’s episode of Kahat Hanuman Jai Shri Ram, while everyone at Yakshraj Kuber’s court is competing and fighting for the special gadha, Maruti leaps in the air and grabs it. The gadha doesn’t harm him and he lands safely on his feet. This proves to Yakshraj that Maruti deserves to own it and so he apologises to Maruti. In return, Maruti asks Yakshraj to show him the way back to Kishkindha. When he reaches the exit of the cave, which is the same rock that Maruti’s family couldn’t move, Maruti yells “Jai Shri Ram” and uses his supernatural gadha to shatter the rock. When it opens, he runs and hugs Anjani, who starts crying happy tears. But Bali is perplexed to see Maruti come out alive!

Then, Sugreev goes to invite Bali for their yearly bull exhibition, as a chief guest. He accepts it, but his mind is restless about Maruti. Bali goes to his treasure box and takes out vajra-paash, a divine weapon to defeat Maruti. Bali’s father blesses the weapon. On the other hand, Maruti gets a bull, who he names Manglu and decorates him for the exhibition. Later, Anjani Devi and Maruti are given a grand welcome. But Bali goes to the dark river and waits for Bhaisasur Kuthumbi to test his weapon. The gigantic bull comes out of the water and Bali fights it with his vajra-paash. The bull transforms into a human rakshas.

In the upcoming episode, Bali sends Bhaisasur Kuthumbi to harm and kill Maruti. When it reaches the bull exhibition, Maruti accepts the challenge that it poses before him. The bull addresses him as Bali’s enemy and Maruti declares that he is ready to fight him. As the bull charges at Maruti, Anjani runs towards her child to protect him. And the bulls jams his horns into Anjani. She falls on the ground, her head hits a rock and Maruti yells his mother’s name. Will Maruti save Anjani and defeat the bull?

Stay tuned to all the episodes of Kahat Hanuman Jai Shri Ram streaming on ZEE5 now!