Maruti misinterprets Madanrishi's words, and decides to leave the palace, to attain aradhya. Find out in detail inside. 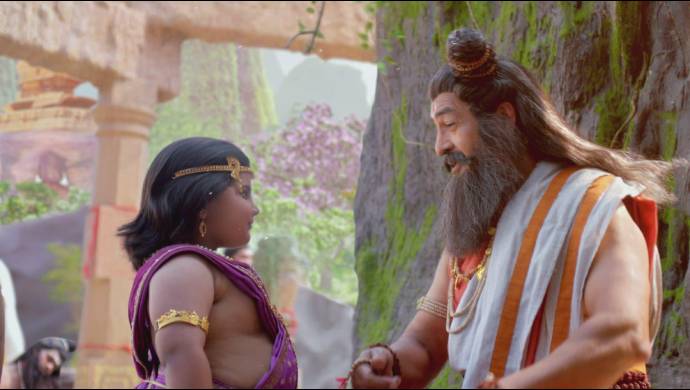 In this episode of Kahat Hanuman Jai Shri Ram, while Maruti’s mother is making him sleep, she finds out that Maruti looks quite disturbed. She asks him if he wants a laddoo which is Maruti’s favorite sweet. Maruti denies, which surprises his mother. Looking at a disturbed Maruti, she comes to know that he’s looking for something and is upset because he’s not getting it. She tells Maruti to keep his search on and meet Madanrishi, an expert, after he is successful. Maruti agrees.

The next morning, Maruti meets his friends, who are upset with him, because he had ignored them. Maruti apologises to them, and convinces them to be friends again. Jambvant reaches the palace to look for Maruti, and comes to know from his parents, that he is quite disturbed and is searching for something. Jambvant is happy hearing this, as Maruti is on the right path.

Maruti reaches Madanrishi’s ashram to get his guidance, in attaining aradhya. Madanrishi narrates Dhruv tara’s story, which inspires Maruthi to work harder to attain aradhya. He thanks Madanrishi for sharing his wisdom and runs to his friends to tell them about the path to attain aradhya. To acquire the same, he decides to follow the Dhruv star. Misinterpreting Madanrishi’s words, his friends insist that they too want to come with him. Maruti denies to take them and convinces them that he will be back soon. However, the most difficult part of this is that Maruti has to take his mother’s permission to let him follow the Dhruv star alone.

Maruti reaches home and finds that his mother is exhausted, after doing all the household chores. He makes his mother sit and takes her feet in his hands, to massage them. To this, his mother gets emotional looking at the love and care shown by Maruti towards her. He then decides to ask for permission to leave the palace and attain aradhya. When he is about to ask her about the same, a worker in the palace calls them for dinner. His mother gives him permission hastily, trusting Maruti’s perseverance and Madanrishi’s wisdom.

10 Hilarious Things That Happen At Every Punjabi Wedding

In the upcoming episode, we will see Maruti leaving the palace, while his parents are sleeping. On his way, he faces many problems and realises that he has to battle evil powers. To find out what happens next, watch Kahat Hanuman Jai Shri Ram exclusively on Zee5.