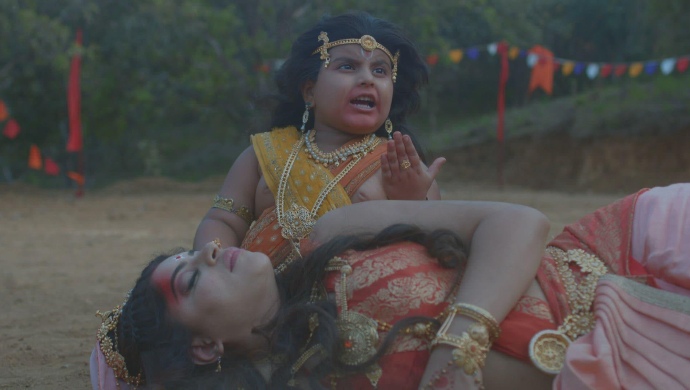 In tonight’s episode of Kahat Hanuman Jai Shri Ram, Bali ties Bhaisasur Kutumbhi with vajra-paash- his rope-like weapon and brings him under his control. He manipulates him into believing that he is a slave and will only obey Bali’s orders. Commanding him to kill Maruti, he sends him to the bull-exhibition where Maruti’s whole family is. At the place, Maruti is in a celebratory mood with his friends and learns that there is no bull more beautiful than his own Manglu. Suddenly, the sky turns dark and a storm takes place. Everyone’s vision is blurred due to the rising clouds of dust and smoke. Sugreev asks Anjani to take care of the children while he handles the situation.

Then, Maruti looks at the bulls running helter-skelter and wishes to help them. Mahadev and Parvati keep an eye on them from above. Maruti uses his extended tail to save people from the stampede and chaos. Suddenly he sees a white horse among the bulls and senses that something is amiss. A gigantic bull, Kutumbhi, appears before him, with Bali’s wicked purpose. Maruti tries to befriend him but he attacks him by blowing fire out of its nostrils. Anjani sees Maruti in danger and runs towards him while the bull is also doing the same. The raging bull pierces his horns into Anjani and she falls unconscious, bleeding from her head. This infuriates Maruti and he faces the bull yet again!

It Happened In Calcutta: EXCLUSIVE Behind-The-Scenes Stills From The ZEE5…

In the upcoming episode, when Anjani is being treated for her injury, Bali tempts Maruti to go and teach Kutumbhi a lesson. He tells him that if he was in his place, he would go to patal-lok and find the bull. Maruti takes his special gadha and stands in front of the bull. When he is about to attack, Bali strikes the ground with his gadha and Maruti is seen falling into an unending pit! Does Maruti lose this time?