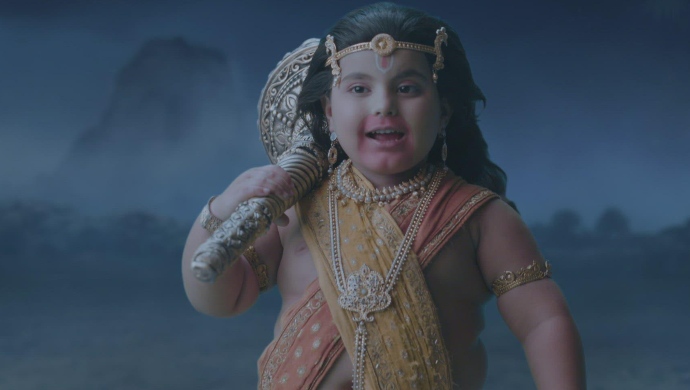 In tonight’s episode of Kahat Hanuman Jai Shri Ram, while Maruti is fighting Kutumbhi, Anjani comes in the way and the giant bull attacks her. She falls unconscious and bleeds from her head. Maruti cries and tries to wake her mother up. Anjani is taken to the palace and treated for her wound. When Maruti starts crying, his father Kesari tries to calm him down. Maruti goes out and prays to Vishnu Dev to heal her mother. Suddenly, Bali comes and mocks Maruti for shedding tears. Bali says that if he was in Maruti’s place, he would even go to patal-lok to find Bhaisasur Kutumbhi and kill him. Maruti gets charged up and runs to get his special gadha!

On Bali’s recommendation, Maruti goes to the mountain where the giant bull resides. He yells out his name and challenges him to fight. He also tells him that he was very wrong in causing a serious injury to Anjani Devi. Bali reached there and hides behind a rock. Just when Maruti lifts his gadha, Bali strikes the mountain with his own gadha. Maruti loses balances and starts falling into a dark pit. Anjani senses that Maruti is in danger and comes back to consciousness. She hurriedly prays to Vayu Dev to save Maruti. Vayu Dev, with his magical powers, lifts Maruti up in the air and makes him sit on the bull’s head, as a sign of conquering it.

Operation Parindey: Amit Sadh And Rahul Dev’s Movie Is Not Your…

In the upcoming episode, Maruti wants to learn to fly, so he climbs a tree and jumps from it. Narad Muni appears and tells that Maruti that if he wants to fly, he needs a guru. He should go to Pakshiraj Garud. He says Maruti can find him in the south-west direction. Maruti takes his gadha and sets off on his quest for wings! Will Maruti be successful?