Maruti finds himself lost in the jungle and begins to miss his mother terribly. How does Parvati help? Details inside. 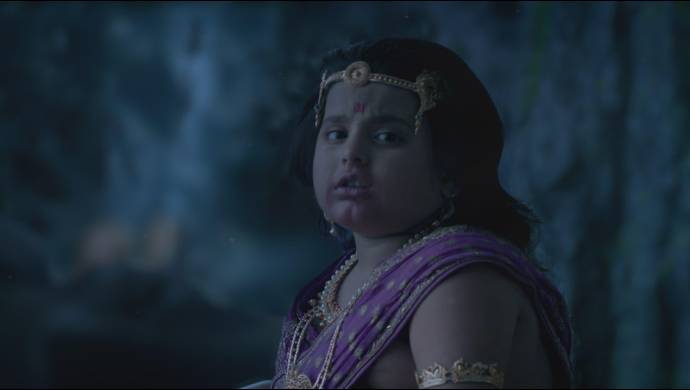 In this episode of Kahat Hanuman Jai Shri Ram, we see that Maruti has lost sight of the Dhruv star and decides to explore the other side of the jungle. Eventually, Maruti loses his way; he is tired and hungry. He sits under a tree to have his laddoos but thinks that if his mother can fast for his well being, then so can he, for his aradhya.

Meanwhile, Maruti’s mother gets panicked in the middle of the night, as she remembers that Rishi Durvasa, is going to be their guest the next morning. Rishi Durvasa is quite short-tempered and his curse can have adverse effects on anyone. She is worried that the shortcomings in preparation should not harm anyone, and orders everyone to start working soon.

Watch the episode of  Kahat Hanuman Jai Shri Ram below:

Mahadev explains to Parvati about Maruti’s mother’s insecurity and her hesitation towards the preparation for Durvasa. He explains that Maruti’s mother was known as Punjastala and was one of the apsaras at Indra’s palace. She had made Indra Dev jealous unknowingly, by praying to Mahadev. In a different scene, an insecure Indra Dev meets Durvasa, telling him that Punjastala has called him and his ten students as guests, to their palace.

The next morning, Durvasa reaches the palace with his ten students. Seeing them, Punjastala is shocked, as she was not told by Indra Dev that Durvasa will also be accompanied by his students. She tells Durvasa that there isn’t enough food for so many people, and listening to this, he turns red with anger and curses Punjastala, saying that she will take rebirth as a monkey. However, looking at Punjastala’s scared face, Durvasa feels sorry for her and blesses her, saying that she would become the mother of a divine child.

Maruti who is the jungle, is finding difficult to sleep and misses his mother terribly. Feeling sorry for him, Parvati takes his mother’s avatar and goes to meet Maruti. Seeing his mother, Maruti is overwhelmed.

In the next episode of Kahat Hanuman Jai Shri Ram, we will see Mahadev deciding to meet and test Maruti. He disguises himself, before appearing in front of Maruti. He tells Maruthi that he will tell him his aradhya’s name, only if the latter gives him something to eat in return.

Will Maruti pass Mahadev’s test? Will he get to know his aradhya’s name? Find out on Kahat Hanuman Jai Shri Ram exclusively on ZEE5