Mahadev turns into Bhole Baba to meet Maruti and decides to take the latter along with him, on his journey. Details below. 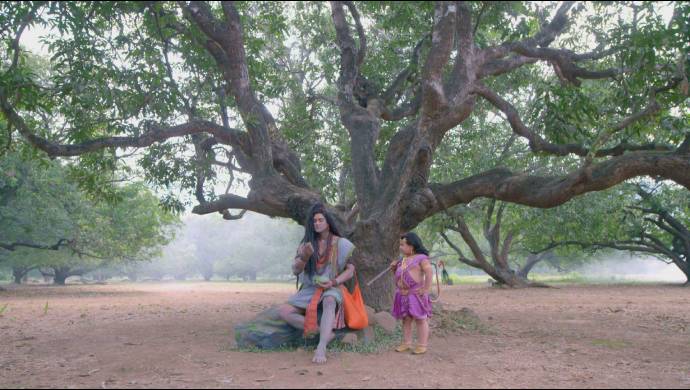 In this episode of Kahat Hanuman Jai Shri Ram, we see that Mahadev has appeared in disguise in front of Maruti to test his perseverance. He has turned himself into a saint aka ‘Bhole Baba’ to trick Maruti. He asks Maruti about why he’s hanging around in a jungle alone. Maruti cleverly replies saying that Bhole Baba calls himself knowledgeable and thus, he should himself try to guess why Maruti is alone in the jungle.

Watch the episode of Kahat Hanuman Jai Shri Ram below:

Maruti leaves from there saying that he has to be somewhere, but is stopped by Bhole Baba. The latter tells Maruti that he is on his way to Mansarovar. Hearing this, Maruti’s eyes light up with joy and he insists that Bhole Baba take him along. After giving it a thought, Bhole Baba agrees.

Rishi Durvasa has arrived at the palace. Anjani is quite nervous about hosting him and doesn’t want anything to go wrong. Rishi Durvasa blesses the couple and insists that he has heard a lot about their son Maruti and wants to see him. Anjani goes to call Maruti, as she thinks he is in his room. While she is searching for him, she mistakes Maruti’s friend for her son and tells one of the helpers to take him for a bath.

Meanwhile, Maruti tells Bhole Baba that he is missing his mother a lot. Out of curiosity, Bhole Baba asks him what he’s carrying in his bag. Maruti tells him that it’s a present for someone special, whom he’s going to meet soon. After having walked for a while, Bhole Baba stops and tells Maruti that he is starving and will move ahead, only if he gets something to eat. Maruti goes to search for food and suddenly spots a dried well, full of skulls. He spots two men coming his way. They tell Maruti that they are guardians of the trees in the forest, and if Maruti wants the fruits, he will have to beg for them.

In the next episode of Kahat Hanuman Jai Shri Ram, we will see that Maruti has managed to get a few fruits for Bhole Baba. After having a bite, Bhole Baba throws away the fruit away, stating that it is very sour. On the other hand, Rishi Durvasa is seen losing his patience, as it is taking very long for Anjani to present Maruti in front of him.

Will Durvasa lose his patience and curse Maruti’s parents? Find out on Kahat Hanuman Jai Shri Ram streaming on ZEE5.