Mahadev finally ends Maruti's test and tells him his aradhya's name. Find all the details inside. 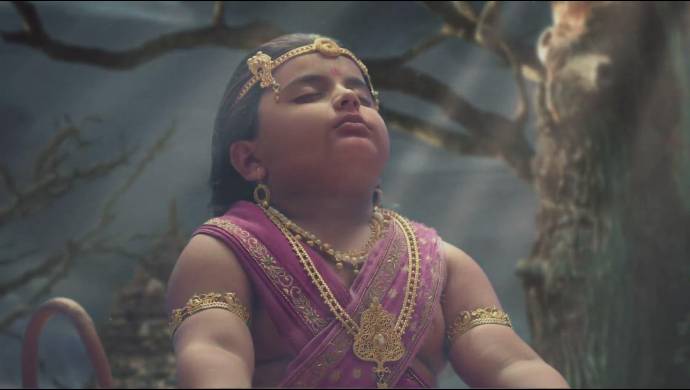 In tonight’s episode of Kahat Hanuman Jai Shri Ram, we see, after clearing many hurdles to meet his aradhya, Maruti stops his journey again. This time, Bhole baba shows Maruti a disturbing scenario. He shows a land filled with skulls and skeletons and tells Maruti that all these bodies were also in search of their aradhya. What he later tells Maruti leaves him shocked. He tells him that there is no such place called Gyansarovar and there is no existence of aradhya in this universe.

Maruti gets sad to know all this and gives the biggest piece of laddoo which he had kept for his aradhya to Bhole baba. Baba tells him that now that he knows that there is no such thing called aradhya he can have the laddoo. But Maruti still believes that he can meet his aradhya and will not eat anything unless and until he gives a piece of laddoo to his aradhya. Bhole Baba fumes in anger and asks Maruti till when he will hang around in the jungle without eating or drinking anything. Maruti answers baba that if required, he will stay lifetime without eating or drinking anything but he will not lose focus from his goal. Maruti even decides that he will not breathe.

Looking at his dedication and perseverance Mahadev who had turned into Bhole Baba to test Maruti return to his original avatar. Seeing Mahadev, Maruti is delighted. Mahadev gives Maruti a mantra to imbibe it in himself and tells him his aradhya’s name

In the upcoming episode of Kahat Hanuman Jai Shri Ram, we will see Maruti has finally got to know his aradhya’s name and happily decides to travel back home by singing his aradhya’s name all the way. Meantime, Rishi Durvasa is still upset and angry with Maruti and his parents for disrespecting his demands. And he now decides to curse the mother and the son as well.

Will Maruti reach the palace before Durvasa curses them? Find out on Kahat Hanuman Jai Shri Ram streaming exclusively on ZEE5

9 Out Of 10 Top Movies In The Bengali Movie Market Are From Zee Bangla Cinema!