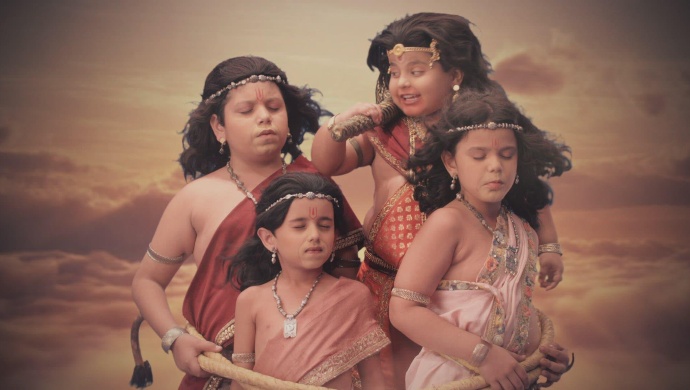 In tonight’s episode of Kahat Hanuman Jai Shri Ram, after learning under Vayu Dev, Maruti’s shows his flying skills to his friends Chagan, Magan and Bandhu. Vayu Dev blesses Maruti saying that the sky is his playground! From swarg-lok, Mahadev also admires Maruti for breaking the norm that a vaanar (monkey) cannot fly or compete with a pakshi (bird).

Narad Muni is surprised to see this and decided to share the news with Pakshiraj Garud. When he reaches his court, Garud is already jealous of Maruti. He tells Narad that he will challenge Maruti at flight and defeat him because nobody can match Garud’s pace! Meanwhile, Maruti flies to his hometown Sumeru.

When he enters his palace, a plate of fruits tempts him as he is hungry. Hiding from Anjani and Kesari, he sneaks out an apple with his elongated tail. When he comes out, his friends tell him off for stealing food. Maruti’s apologizes to them. Just then, Garud enters and threatens Maruti to stop flying.

When Maruti refuses to back off, Garud ties all of them up with a rope. Maruti frees himself with his power but Chagan, Magan and Bandhu are abducted by Garud into an unknown land. Mahadev explains that Garud thinks Maruti is going against the law of nature, whereas he is actually only trying to prove that everything is possible! When Maruti finds his friends, Garud shows up again.

It Happened In Calcutta: EXCLUSIVE Behind-The-Scenes Stills From The ZEE5…

7 Behind-The-Scenes Pictures Of Ek Mahanayak Dr. B. R. Ambedkar That You…

In the upcoming episode, Garud subjects Maruti to a condition that if he wants his friends free, then he will have to race him in flight! The fastest to finish will win. But if Maruti loses, his friends will be held captive for life. Maruti immediately takes off and Garud follows him, changing his form to the eagle. Chagan, Magan and Bandhu start praying for Maruti. Will Maruti pass the test of speed?