Maruti finally gives Mahadev his laddoos but the latter decides to test him again. All details inside. 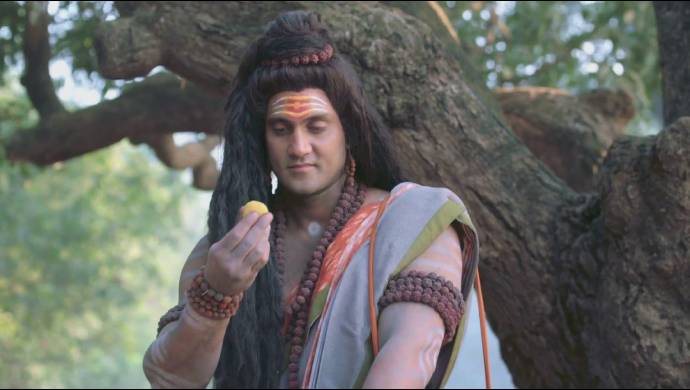 In tonight’s episode of Kahat Hanuman Jai Shri Ram, we see that Maruti is searching for food in the jungle, to feed Mahadev. He has disguised himself as Bhole Baba to trick Maruti. The latter meets two strangers, who claim that they are the guardians of the forest and if Maruti wants to pluck a fruit from any tree, he has to beg for it. They promptly try to pull out their weapons, to attack Maruti. The latter tells them that he is a yuvraj, and thus, he won’t beg but would request them to give him food. When they show Maruti how to beg by bending their heads, he grabs them and pushes them inside the well, full of skulls.

Maruti manages to get fruit for Bhole Baba. As soon as the latter takes the first bite, he finds the fruit extremely sour and throws it away. Maruti innocently tells Bhole Baba that he has learnt from his mother, to always respect food, no matter how it tastes. Bhole Baba acts stubborn, telling Maruti that now he will stay hungry and will not continue their journey. Finally, Maruti decides to give Bhole Baba one of his laddoos. After having the laddoo, Bhole Baba tells Maruti that now they will visit  the latter’s palace and tell his mother to make laddoos for him. To stop the same from happening, Maruti pulls out another laddoo from his bag, pretending as if his mother has put in an extra laddoo, by mistake. Meanwhile, Rishi Durvasa loses his temper, while waiting for Maruti. This worries everyone as they fear that he will curse them.

Never Kiss Your Best Friend Review: A ‘Complicated’ Story Every…

In the next episode of Kahat Hanuman Jai Shri Ram, we will see Mahadev testing Maruti one more time. Also, Rishi Durvasa loses his patience and is red with anger. He tells Anjani that this time, she and her son, both will be cursed.

Will Maruti pass Mahadev’s test? What curse is Maruti about to get? Find out only on Kahat Hanuman Jai Shri Ram. For more fun and entertainment, watch your favorite shows on ZEE5