Yakshraj decides to test Maruti's wisdom. Meanwhile, Durvasa is about to curse Maruti and his mother. Details inside. 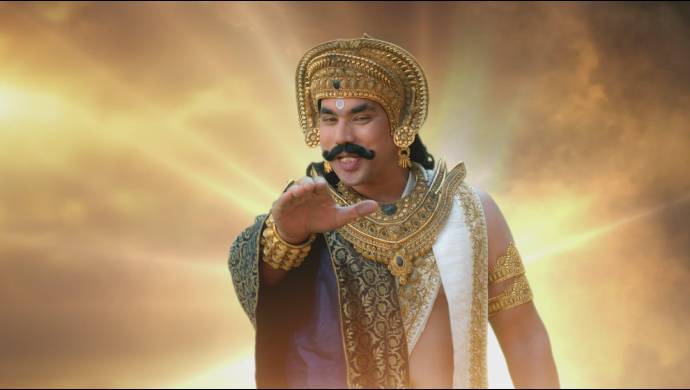 In tonight’s episode of Kahat Hanuman Jai Shri Ram, we see that Bhole Baba is finally satisfied, after having Maruti’s laddoos and he is ready to continue their journey ahead to Mansarovar. They stop again as Baba gets thirsty and he tells Maruti to get some water for him. Maruti goes to a nearby pond to do the same. When he is about to fetch some water from the pond, he is stopped by Yakshraj, the guardian of the pond. He tells Maruti that if he wants water, he needs to answer three questions. He adds that every wrong answer will get him slowly buried in to the ground. The first question he asks is- what is an approximate distance between the sun and the moon? Maruti answers this question incorrectly. The second question he asks is- what is the most difficult task? Maruti gets this question wrong as well. As a result, half his body gets burried into the ground again. He asks Maruti one last question- what is that thing in the universe that can be bent very easily? Maruti fails to answer this too.

However, after a while, Maruti explains all his answers to Yakshraj. Yakshraj is impressed listening to Maruti’s explanations, and takes him out of the ground and also grants him permission to fetch water from the pond. Maruti gives Baba water to drink and they move ahead on their journey.

Meanwhile, Anjani is very worried about Maruti, as she cannot find him anywhere in the palace. She gets to know that Rishi Durvasa is losing his patience and is getting quite angry with her and her son. Anjani tries to cool him down by giving him some delicacies to eat. But he ignores all of it and asks for Maruti. Anjani and Kesari Maharaj apologise to Durvasa saying that Maruti is not in the palace. This angers him even more and he yells at Anjani, saying that this time, not only her but also her son will also be cursed.

Planning To Get Inked? Check Out These Cool Tattoo Styles Inspired By Ssudeep…

In the next episode of Kahat Hanuman Jai Shri Ram, Mahadev tells Maruti that for continuing their journey, they need to have some food, water and take rest. Maruti tells Mahadev that to reach his destination, he is ready to give up all these luxuries.

What curse are Anjani and her son going to get from Rishi Durvasa? To find out keep watching Kahat Hanuman Jai Shri Ram only on ZEE5

For more fun and entertainment, watch your favorite shows on ZEE5